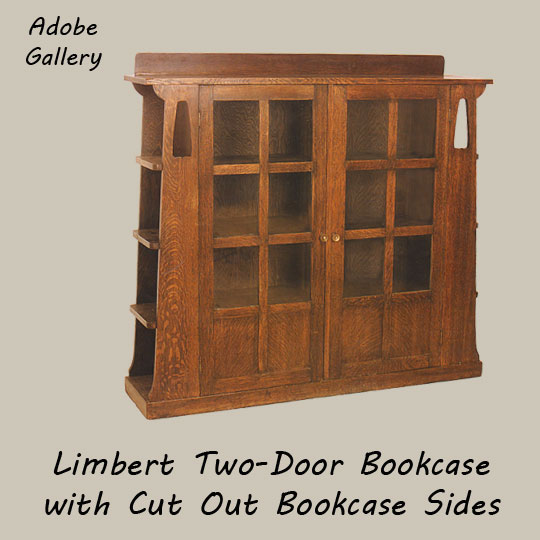 This quarter-sawn oak bookcase was made by Charles P. Limbert Company of Grand Rapids, Michigan, later Holland, Michigan, around 1906-1910.  It is designated the #526 Bookcase.  It has two-doors with shelving on each end and a pyramidal cut out at the top side shelves.  It is unsigned but documented in Limbert’s catalogs.  Each door has eight panels, six of which have glass and two with wood panels.  There are three shelves behind each door plus the one at the bottom.

Charles P. Limbert started manufacturing an extensive line of furniture under his name in Grand Rapids in 1902.  He moved his operation to Holland, Michigan, in 1906 to escape from the overly commercial character of Grand Rapids.  He was influenced by Charles Rennie Mackintosh of the Glasgow school.  The simplicity and honesty of Gustav Stickley’s designs undoubtedly had a great impact on Limbert as well.  Limbert’s furniture shows originality through the subtle use of curves and delicate supporting members.

Charles P. Limbert Company produced its Arts & Crafts furniture from 1902 to 1918.  Limbert continued to manage his company until 1922, when poor health prompted him to sell his share in the company.  He died in 1923 and the company ceased making furniture under the Limbert name in 1944.

Condition: The condition has been professionally described as “some color loss to original finish, fine condition, minor edge wear and chips.”

Provenance: this Limbert Two-Door Bookcase with Cut Out Bookcase Sides is from the collection of a gentleman from Santa Fe