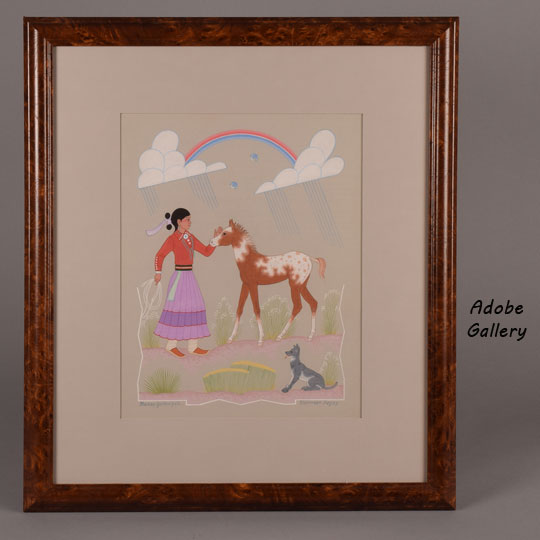 This original painting was created by Harrison Begay, a prolific and influential Diné of the Navajo Nation artist. Begay’s subject here is Diné girl interacting with animals. She pets a pony with her left hand and holds a rope in her right hand. Down below, a dog looks on excitedly, with ears perked up and tongue hanging out. Up above, a rainbow links two cloud formations, from which rain emerges.

Begay preferred warm pastel tones for his paintings of life on the Navajo reservation. His color choices had the effect of softening and sweetening his subjects. Here, he augmented his pastels with bold red, green, and brown tones, which adds energy to the image. His linework, as usual, is excellent. This is a fine example of one of Harrison Begay’s favorite styles.

The painting is signed Haskay Yahne Yah in lower left and Harrison Begay in lower right. It is framed in a carved wood frame, under matting in gray with a hint of green, which matches the tone of the paper.

Harrison Begay (1917-2012) Haskay Yahne Yah - The Wandering Boy was a world-renowned Diné (Navajo) painter who is generally regarded as one of the most successful and influential early Native American painters.  Begay studied under Dorothy Dunn at the Santa Fe Indian School in the 1930s, and then attended colleges in North Carolina and Arizona. From 1942 to 1945, he served in the US Army Signal Corps.  In 1947, Begay returned to the Navajo reservation, where he enjoyed a long and productive career as a painter. He is known to have continued painting into his 90s. Begay passed away in 2012, leaving behind a large body of work and a legacy in the world of Native art.

Provenance: this Harrison Begay Untitled Painting of Diné Girl and Animals is from a private Oklahoma collection