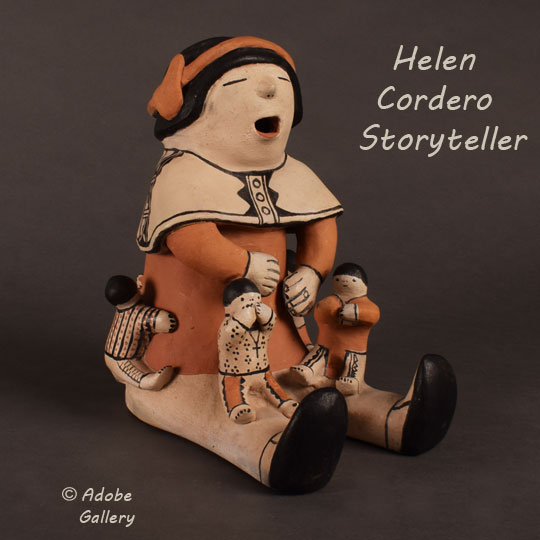 This male storyteller figurine with five children was made by Helen Cordero of Cochiti Pueblo. Those who are familiar with pottery storytellers will certainly know that Helen Cordero was the creator of this figurative style; her pieces are by far the most sought-after by today's collectors. This wonderful example dates to the 1970s, which many consider to be the artist's strongest period.

A seated man with closed eyes, an open mouth (indicative of telling a story or singing), and traditional pueblo attire is the central element. Five children appear, spaced evenly around the man's wide abdomen. Each leg serves as a seat for a child, while another pair clings to the man's sides. The fifth child hangs from an article of clothing on the man's back. They are supposed to be paying attention to the important male figure, but it looks like play is the central focus of these kids.

Cordero's work with this spirited group of figures is excellent. The color scheme is the typical orange and black over cream, with thin black lines defining the details and large blocks of orange creating colorful clothes. There is something immensely appealing about the arrangement of the children on this piece—they surround the central figure in a way that feels natural. More elaborate examples of Cordero's work are available, but this classic piece deserves the attention of those who collect the finest figurines.

The bottom of the piece is signed Helen Cordero, Cochiti N Mex.

Helen Cordero (1915-1994) was a Cochiti Pueblo artist. Cordero was truly an original artist. Unable to fashion pottery vessels in a manner with which she could be satisfied, she changed her course to figurative pottery, rather than give up altogether. Cordero created the very first storyteller pottery figurine in 1964. Little did she know that she was starting a new tradition and changing the course of Pueblo pottery production. Now, potters at most of the Pueblos make storyteller figurines—no longer exclusive to Cochiti Pueblo. A storyteller made by her is to be a treasured item in any collection. Cordero was the granddaughter of Santiago Quintana and Magdelena Quintana; daughter of Mr. Quintana and Caroline Quintana-Pecos; sister of Trinidad Herrera; wife of Fred Cordero; and mother of Dolores Peshlakai, Jimmy Cordero, Antonita "Toni" Suina, George Cordero, Leonard Trujillo.

Condition: very good condition, a few touches of overpaint on one side near base

Provenance: this Helen Cordero Storyteller Figurine with Five Children ca. 1970s is from a private collection