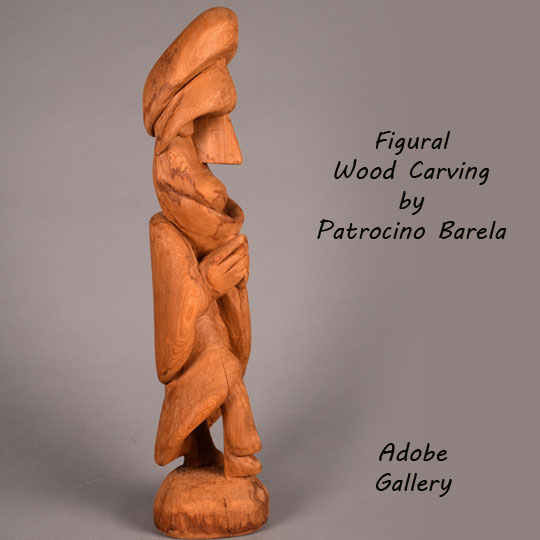 This beautiful wood carving was created by Patrocino Barela, a self-taught Hispanic artist who lived and worked in Taos, New Mexico.  Barela is often credited as an influence by New Mexico artists who created wood carvings of Catholic saints.  These carvings are called santos, and their creators are referred to as santeros.  While Barela is sometimes referred to as a santero, his pieces are less detailed, more abstract, and more stylized than the typical santo. They often stray from the santero’s subject matter into more broad realms, and they occasionally resemble tribal artworks from other continents, so we’d suggest that Barela and his work defy classification.

This tall, slender figure is a fine example of Barela’s work.  Its robe, collar, and headpiece certainly suggest religious imagery, but as usual, the details are left to the viewer’s imagination.  Its hands are clasped, perhaps in prayer, and its face is mysterious and appealing.  The wood’s tone is rich and beautiful, which suits the elegant composition perfectly.  Each Barela carving, though modest in certain ways, tends to carry with it a powerful presence, and this wonderful piece is no exception.

Barela signed the piece by carving Pat. Bar into the underside of the base.

Patrocino Barela (ca.1904-1964)—or “Patrociñio Barela”, according to certain sources—was a self-taught wood carver. Barela found his calling as a carver of sacred objects in 1931. He repaired a figure of St. Antonio, a job for which he was promised five dollars. Although the five dollars never appeared, Barela realized that his work had value, and he continued to make figures.  He was taken on by the Works Progress Administration and eventually the Public Works of Art Project. Because he was illiterate, he was given a sheet filled with squares to which he would add a cross every day to record his work. This was in 1935. Eventually, his work was exhibited at the Museum of Modern Art, but he had no ambition to see the eight objects chosen as part of a Federal Arts Project exhibition there. He was lauded by the museum as "the most dramatic discovery" and he was called "discovery of the year" by Time magazine.  The largest collection of his work is at the Harwood Museum of Art in Taos—part of the University of New Mexico. His legacy is carried on by many of his descendants.  Barela died in a house fire in 1964.

Provenance: this Untitled Figural Wood Carving by Patrocino Barela is from the collection of a family from Florida