Untitled Carving of Person with Staff by Patrocino Barela [SOLD] 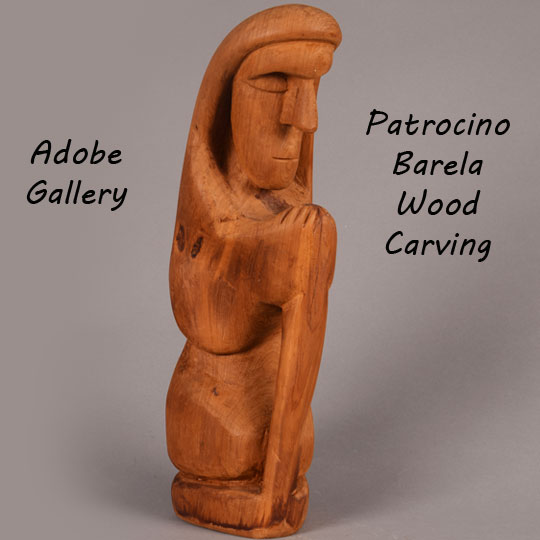 This wood carving was made by self-taught Hispanic artist Patrocino Barela.  Despite having no formal training, Barela created work that would eventually become widely praised and enthusiastically collected.  He had a way with form and space which must have been inherent to his being.  Carving figures from wood is, of course, a laborious process, which makes the easygoing elegance of Barela’s carvings even more impressive.

This particular piece is strong and beautiful.  Barela’s subject kneels, clasping his hands around the top of a wide staff.  The figure is depicted with head bowed and eyes and mouth closed, suggesting prayer or meditation.  As usual, the face is rich in character despite containing few details, which is typical of Barela’s work but always impressive.  There is much to admire in the depth of these forms, and the piece will reveal new pleasures when viewed from different angles.  It is particularly strong in profile, as this view reveals a perfect view of its stylish modernist form.

A label reading Pat Barela is affixed to the underside of the base.

Patrocino Barela, also known as Patrocinio Barela or Patrociño Barela (ca. 1904-1964), was a self-taught wood carver.  While the exact year is unknown, Barela was born in the early 1900s. His mother died early in his life. According to one version of his story, he was at some point found wandering around Denver. Barela did not attend school for more than a few weeks and was not able to write. He worked as a steelworker, miner, railway worker and as a farmhand.  In 1930 he married a widow with four children. Eventually, they had three more, giving them seven in total. During the early 1930s, he began creating the elegant wood carvings for which he is well known today.  Because of the religious nature of his subjects, he was sometimes called a santero, but he did secular work too. His work was shown at the Museum of Modern Art in New York with other artists of the Federal Art Project; he was feted as "a discovery."  Barela passed away in 1964.

Provenance: this Untitled Carving of Person with Staff by Patrocino Barela is from the collection of a family from Florida