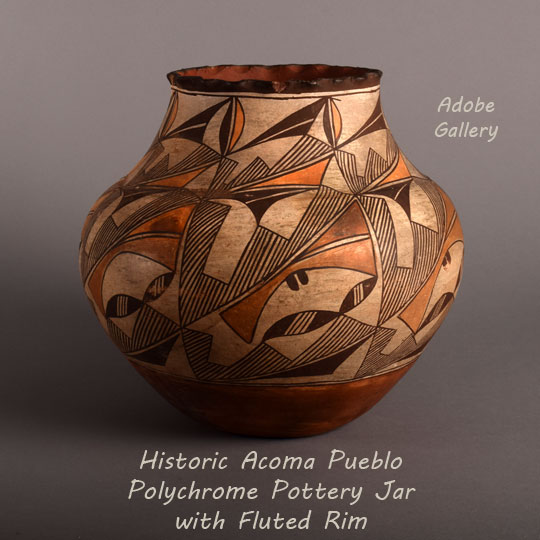 Attributes of this historic Acoma Pueblo pottery jar—shoulder above mid body, hachured designs, fluted rim, long neck, and continuous decoration from body to rim—help establish a date of circa 1880-1900.  It is not noticeable immediately, but the design was placed in a spiral pattern.  One may think that the fluted rim was a later innovation, but a jar collected by Dr. H. J. Spinden in 1909 has a fluted rim and is dated circa 1900. Hachure has been used since prehistoric times.

The spiraling design bands contain hachure elements and triangular orange sections.  In typical fashion, the design fills the vessel wall from lower framing lines to the rim.  The black rim is fluted, and the lower body is red.  The underbody is concave in traditional fashion.  Painted on the underside are the numbers 01451, an indication of a prior collection.

We do not normally look at a pueblo jar and make the connection to the history of the people, but each item of historic pottery had a reason to have been made.  It could have been made for use by the family, in which instance we can study the experience of the individual as a potter, we can deduct from the design her experience as an artist, and we can generally deduct how long it was used before being sold, or, if it appears to have been made to be sold and was never used.

It is not likely that much pottery was made in the late 1800s and very early 1900s for the purpose of selling to museums, collectors, or tourists, however, by the 1930s, judging by a photo of the wholesale dealer A. H. Fidel of his store at San Fidel, New Mexico, we see about a thousand Acoma pottery items stacked atop each other that he was offering for sale. The market for pottery was well advanced by then.

This Acoma jar, believed to date to the last quarter of the nineteenth century, was not likely made to be sold, but was made of necessity for household use.  We will never know for sure, but we can speculate.

Condition: very good condition with minor chip on fluted rim in one place (see image below).

Provenance: this Historic Acoma Pueblo Polychrome Pottery Jar with Fluted Rim is from a gentleman from Albuquerque

Reference: The Pottery of Acoma Pueblo by Lanmon & Harlow