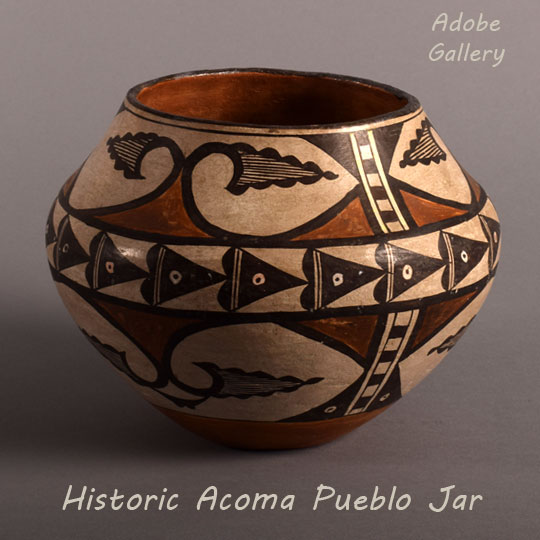 This marvelous small historic polychrome jar from Acoma Pueblo appears to date to circa 1920s.  The potter went back in history to the 1850s Acomita designs for her primary elements of “spirals with pointed caps filled with parallel fine lines.”  She placed these in back-to-back elements on the neck and lower body.  In between, she placed a band of connected rain clouds.  To separate the back-to-back design panels, she placed black-and-white alternating squares in a vertical bar. Adjoining the spiral curves, she filled the space with orange slip.  The base is orange, as is the inside rim.  The rim is black.

Pottery from Acoma Pueblo, dating between 1780-1860, has been classified as Acomita pottery.  The name derived from the pueblo farming village Acomita.  Following the Acomita Polychrome period is the Acoma Polychrome period, which is the classification of late nineteenth century historic pottery and twentieth century contemporary pottery.

Potters from New Mexico pueblos are encouraged to visit the School for Advanced Research in Santa Fe to view from the thousands of pottery vessels in their massive collection, where they are likely to see pottery by their mothers and grandmothers as well as examples from a thousand years ago.  It is from such visits that older designs begin to be used again on contemporary wares.  Another reference for historical pottery designs is the 2013 book The Pottery of Acoma Pueblo by Harlow and Lanmon.  Additionally, an older reference is the 1992 book Acoma & Laguna Pottery by Rick Dillingham.

Condition: very good condition with residue of a blue felt marker on the interior bottom, and a vertical crack from the rim to the shoulder (stabilized)