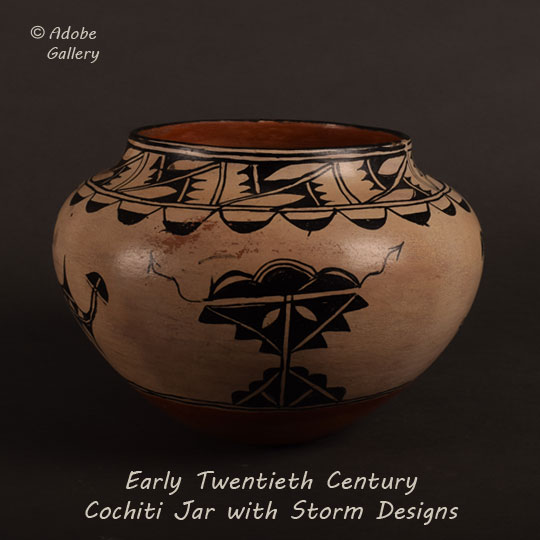 This historic black-on-cream pottery jar with storm designs was created in the early 1900s by an unknown Cochiti Pueblo potter. The look and feel of the piece suggest this time period, and the dark red band circling the top of the red-slipped base confirms it. On an earlier piece, this red band would be wider; on a significantly later piece it would not appear at all.

We are always pleased by the acquisition of a Cochiti jar. It doesn't happen often-Cochiti produced significantly less pottery than neighboring pueblos, and much of what was made after 1880 took the form of figurines. With Kewa Pueblo producing pottery in large amounts just across the river, there was no shortage of functional pottery already available to Cochiti people.

This jar has a low, wide shape that is somewhat reminiscent of Zuni pottery, particularly in its rounded shoulder. Two design bands appear in the typical black pigment over cream slip. The slim upper band circles the neck with a repeating pattern of triangular forms nested within larger rectangular designs. The large lower band covers most of the jar's exterior, alternating lively storm patterns with abstract floral designs. Rain clouds hang from the upper band, and pairs of lines with ceremonial breaks separate each section.

Text written on the base in pencil, perhaps by an early dealer, reads Cochiti N. Mex, $5.50.