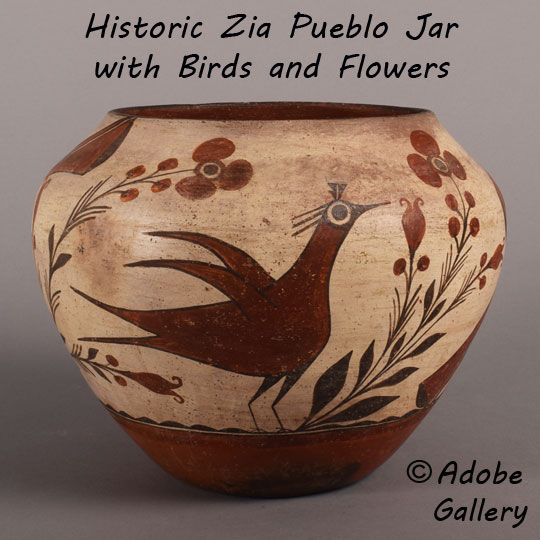 This historic polychrome pottery jar comes from Zia Pueblo and likely dates to the 1920s. A thin band of dark red located at the top of the red lower section of the jar allows us to date the piece, as this mark does not appear on post-1930 pieces. It’s unlikely that the jar was made for daily use, but it appears to have been handled extensively, which has resulted in an appealing patina that is similar to that which we see often on slightly older pieces.

The primary design is a bird in dark red with black outlines. The unknown creator of the piece ventured into expressive territory when she made the bird’s visible eye occupy the vast majority of its head. A thin beak points outward toward one of many nearby flowers, while the others reach up, around and over the bird. This exuberant design appears twice on the jar’s exterior, with traditional Zia designs in black and red serving as vertical dividers. These black and red pigments work together perfectly with the cream slip, which is similarly rich as it varies in depth around the jar’s rim. A thick fire cloud appears on the base, enhancing the older look and feel of the jar.

Condition: Very good condition. Blacklight examination reveals no restoration or repair. Some dark residue on the piece was removed carefully with Acetone

Provenance: this Historic Polychrome Pottery Jar with Birds and Flowers from Zia Pueblo is from a private collection