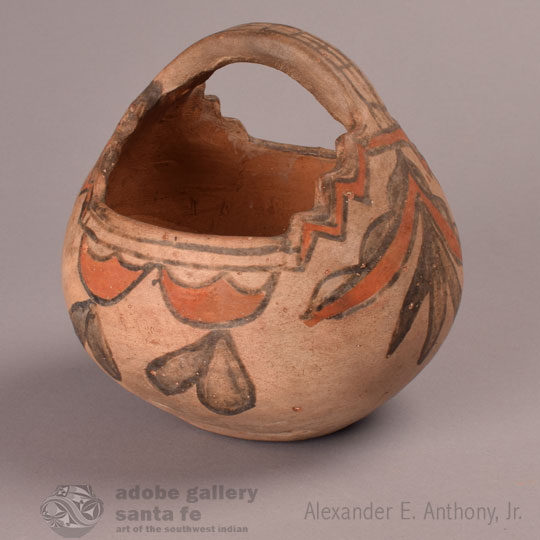 Pueblo pottery bowls of this style are typically used at the pueblos in ceremonial ways: in the kiva, in parades, and at home as repositories for blessed cornmeal. A sprinkle of cornmeal is tossed to the four directions at sunrise on mornings as an offering.  Some bowls have handles and some do not. The smaller ones without handles are presumably used in pueblo homes. Ones with handles, like this one, are styled for use in outdoor ceremonies.

This bowl is not signed with the name of the maker, however, ceremonial bowls generally are not signed.  This one has traits that lead to an attribution of the potter and painter as Martina Vigil Montoya (1856-1916) and Florentino Montoya (1858-1918), who are considered to be among the best San Ildefonso potters of the late 19th century.

One of the traits of their work that is useful in identifying their pottery is their technique of covering the entire vessel with white slip rather than leaving an unslipped area of the natural clay exposed under the decorated area. This small cornmeal bowl with an arched handle, generally used for ceremonial purposes during an outdoor function, is typical of the manner in which they applied white slip. For this reason, this piece is attributed to their hands.

The designs are ones seen on vessels by Martina and Florentino, another reason to make such an attribution.There are red clouds outlined in black and black clouds also outlined in black.  The handle is painted with a checkerboard design and the terraces are outlined with red slip with black frame lines.

Condition: this Historic San Ildefonso Polychrome Terrace Rim Pottery Bowl by Martina Vigil and Florentino Montoya is structurally in excellent condition. There is no evidence of repair or over-paint of the surface.  There are abrasions and minor pitting, as expected.

Provenance: from the collection of a gentleman from Pennsylvania.