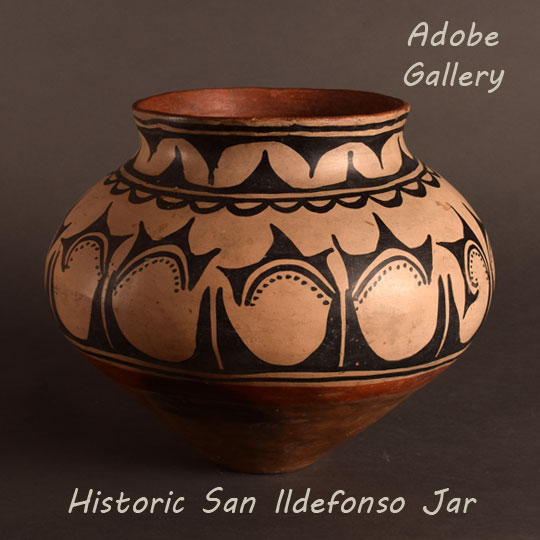 One cannot fail to be impressed with the profile of this historic San Ildefonso Pueblo pottery jar—from the very small 3-inch diameter of the base to the expansive growth of the wall as it reaches a twelve-inch mid-section, to a short concave neck and rolled out rim.  These exaggerated dimensions are keys to the attractiveness of the jar.

Complimentary to the vessel’s beautiful exaggerated shape is the design, executed in black pigment on a soft cream background.  The series of hooks on the body are heavy rain clouds with drops of rain.  Adding to this are semicircular clouds suspended from the framing line at the base of the neck as well as the triangular-shaped clouds on the neck.  Rain, water, moisture are the design themes, appropriate for a water jar.

The cream bentonite slip is that which was imported from Cochiti Pueblo in the late 1800s and very early 1900s by Martina Vigil Montoya (1856-1916) and Florentino Montoya (1858-1918) from their visits to Cochiti.  They introduced this slip to the San Ildefonso potters before they eventually moved to Cochiti in 1905.   San Ildefonso traditional slip required stone polishing, but the Cochiti slip could be rag wiped for polishing, saving many hours of labor.  This use of the Cochiti slip would help date this jar to circa 1900, plus or minus a decade.  The polished red rim is another indication of age as potters stopped using red in favor of the use of black between 1895 and 1910.

In addition to the red rim, there is red painted on the inside of the rim to a depth of 1-¼ inches and a one-inch red band below the design section.  A ceremonial line break occurs from the rim framing line through the design and the framing line at the base of the design.

Provenance: this Historic San Ildefonso Pueblo Black on Cream Pottery Jar with Red Rim is from the collection of a client from Kansas

Recommended Reading: Pottery of the Pueblos of New Mexico 1700 - 1940 by Jonathan Batkin