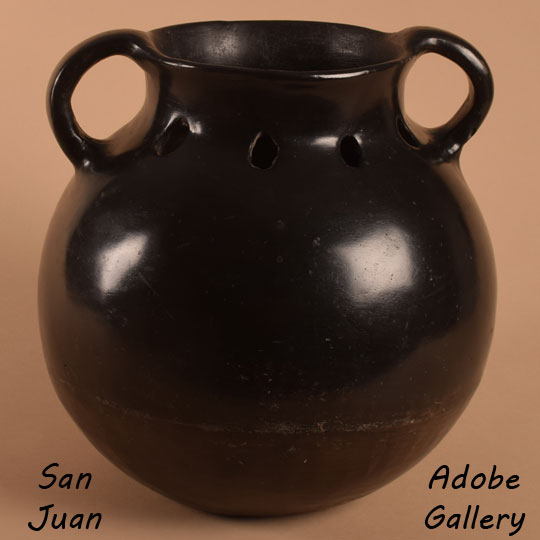 Potters at the former San Juan Pueblo are recognized as traditionalists in the pottery making craft.  Until 1935, there was little or no change in the styles of pottery produced at the pueblo.  It had remained the same for hundreds of years, despite the influence of traders, merchants, and tourists.  In 1935, a group of potters studied pottery ancestral to their pueblo and created a new style, based on the prehistoric style, to cater to the tourist market.  For home use, they still made the traditional wares.

This jar, then, is one to ponder.  It is a traditional globular form, with a pair of added handles.  The upper two-thirds of the vessel was coated in red clay, stone polished, and fired in a reduction firing.  The anomaly is the series of holes just below the neck of the jar.  There is no functional value in them, and one wonders why a potter would add them to a jar.  From appearances, the jar dates to circa 1930 or slightly earlier.  It has a concave underbody in traditional olla fashion.

The jar is unique and, yet, fascinating.  The holes add to the mystique, and create an interest above that normally associated with a traditional jar. The unknown is fascinating to us.  The potter had a reason for doing this, but it escapes and intrigues us.  Perhaps a potter at Ohkay Owingeh will see this and shed some light on it for us.

Condition: a small section of the rim has been repaired.  The section is clearly visible on the inside of the neck, but professionally repaired on the exterior and the repairs are not visible.

Provenance: this Historic San Juan Pueblo Black over Gray Pottery Jar is from the collection of a family from Albuquerque