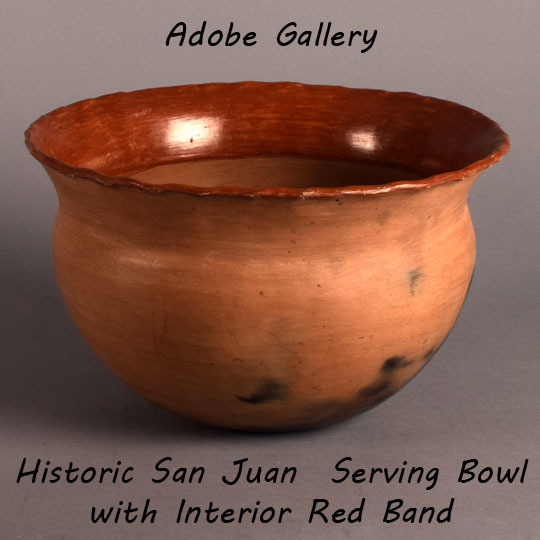 This is a very traditional San Juan Pueblo, now Ohkay Owingeh, historic pottery serving bowl.  It has a fully polished exterior and a polished interior of the natural clay, with the addition of polished red slip around the interior of the rim.  The shape of the bowl is very traditional with an outwardly curving rim.  Pottery bowls traditionally have red slip applied to the exterior of the rim, but because this bowl has an outward flaring rim, the red slip was applied to the interior of the rim which would be more visible. This is an extraordinary bowl whose elegance is enhanced by the lack of a painted design. Traditional decoration with fire clouds serves the purpose of design. The natural clay is a soft color with a pleasing appeal.

According to Jonathan Batkin, pottery making at San Juan almost died out by 1900 except for an occasional piece made for household use or for sale or trade. There was a revival in the 1930s, but it was of a different style. It is difficult to find pieces of this size from this time period.  This bowl most likely dates to circa 1920s.

Condition: good condition with some abrasions around the rim.

Provenance: this Historic San Juan Pueblo Pottery Serving Bowl with Interior Red Band is from the estate of a previous client of ours who had impeccable taste and purchased accordingly.