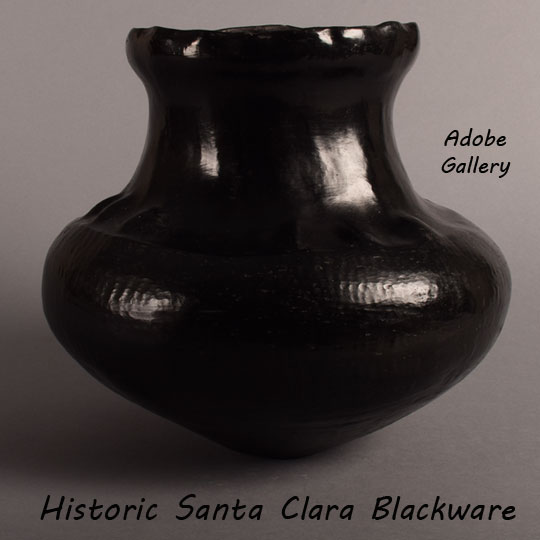 This historic blackware pottery jar was created by an unknown Santa Clara Pueblo potter in the early 1900s. The vessel's form is a traditional Tewa water jar shape that has been used for centuries. It is an elegant form, created most famously by Sara Fina Tafoya but used by many others as well. Contemporary Santa Clara potters continue using this form, often in smaller variations, to pay tribute to their predecessors.

The jar's widest point extends to almost a foot in diameter before curving inward, softly at first and then sharply, forming a circular edge around the vessel's shoulder. Here, four groups of three raised lines point inward. They lead to a tall neck, which flares outward and then straight up at the fluted rim. As far as design elements go, these groups of lines are atypical, unless of course they appear within a U shape, as part of a bear paw design.

The vessel is polished in the manner that is expected of works from this era. It looks and feels beautiful, showing its age but no significant damage beyond a small rim chip. Those who appreciate polished blackware will find much to appreciate here.