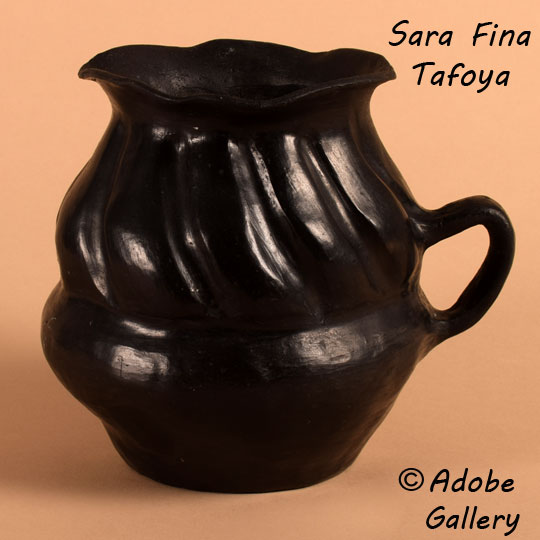 This historic small pottery water pitcher has extremely thin walls and is lightweight and is attributed to Sara Fina Tafoya of Santa Clara Pueblo. Around the upper body and neck, the clay was formed in swirls impressed into the clay. Pueblo pottery of this smaller size was an innovation brought about by the arrival of the AT+SF train to New Mexico in 1880, bringing tourists to the New Mexico area. The standard large utilitarian vessels traditionally made for use in pueblo homes were not convenient for travelers on the train. Potters accommodated the need by making smaller pottery for the tourist trade.

The thin wall of this pitcher is an indication that the piece was made from an earlier clay bed that was no longer accessible after 1920. The lower section of the pitcher expands outward from the flat bottom then curves inward to the pinch in the shape. Above the plain polished lower body, the piece is filled with melon ribs pushed out from the inside. At the neck, the ribs cease and the neck flares outward and undulates at the flared rim.

According to Charles King, in his book Born of Fire, "The clay used in the late 1800s to early 1900s differed from the clay used by potters today. The earlier clay came from a location near Santa Clara Pueblo, but the pit from which it was dug, worn away by flooding, had collapsed by the 1920s. Margaret Tafoya noted that the clay from this time period was slicker, which meant it was more elastic and could be worked more easily into thinner walls. (Blair and Blair 1986, 90) Santa Clara pottery from before about 1920 is thinner, lighter, and more widely varied in sculptural forms and the size of the vessel. Since the clay used today is not as elastic, Santa Clara pottery must have thicker walls to give the vessels strength and stability." [King,2008:23]

In Blair and Blair, page 49, figure 2.8, there is a water jar with an impressed swirled neck which is attributed to Sara Fina Tafoya. It is likely that his small pitcher, with its thin walls, ribbed body, and handle, was the work of Sara Fina Tafoya, having been made in or before the 1920s.

Condition: very good condition with one small repair in the rim just above the handle.

Provenance: this Santa Clara Black Pottery Pitcher with Melon Ribs attributed to Sara Fina Tafoya is from a private collection