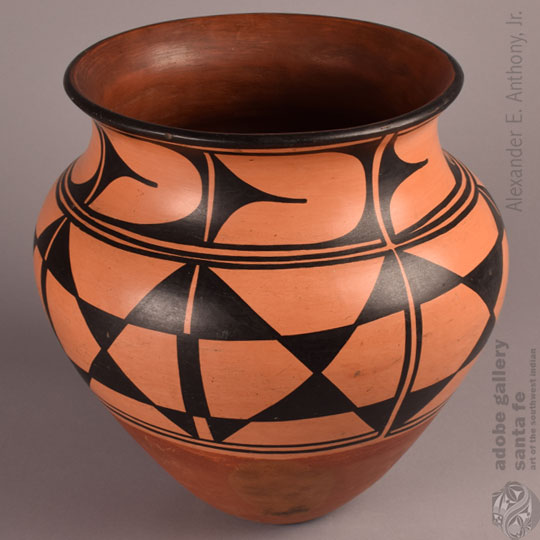 This Santo Domingo Pueblo pottery jar by the Aguilar sisters, with its intense black design on a creamy red background, is a highlight of their work. and not just because of its atypical color.  Its shape is unusual and very appealing. It’s a bit taller than their norm, and its rim is almost as wide as the jar’s widest point. As with many of the Aguilar sisters’ jars, it looks much more modern than it actually is.

This jar is unusual in that the body was covered in red slip rather than the usual cream slip.  Here, it’s a bit lighter than usual. It appears almost orange under certain light sources. According to Chapman: “From comparatively early times, a small quantity of red ware seems to have been made by a few of the Santo Domingo potters.  Not more than ten specimens have been found during the course of this study. Most of these give evidence of considerable age, though two in the collection of the Indian Arts Fund are known to have been made by one potter as late as 1920.”

Chapman continues “The forms of these few known specimens of bowls and jars are identical with those of Black-on-cream ware.  The red clay slip is apparently mixed with a small proportion of cream slip, for in all specimens the tone of the decorated zone is lighter than that of the red underbody.”  (p.152)

It is questionable as to whether such a jar was made before the Aguilar sisters developed their dramatic style of polychrome designs and solid black designs.  The reasoning for questioning the date when this was made is the appearance of the tulip design around the neck—a design that appears on jars earlier than 1900.  The black designs on this jar are very typical of traditional late 19th century Santo Domingo jars. The vessel shape, color and double framing lines are keys to identifying it as the work of one of the Aguilar sisters.

We are not sure exactly when the Aguilar sisters’ careers ended.  An unpublished text by Francis Harlow and Dwight Lanmon includes a handful of pieces by the Aguilar sisters, most of which are reported to date to 1910-1915. Chapman (p.152) states that two Black-and-red jars are known to have been made by one potter as late as 1920. He does not state the name of the potter, however.  Douglas states that the two sisters passed away around 1915. Batkin (p.99) states that “evidence suggests that Felipita Garcia continued her style as late as 1920 to 1930; she also made traditional polychrome and Black-on-red vessels, all of them beautifully executed.” It is not uncommon to find conflicting historical reports regarding the pueblo peoples’ birth and death dates.