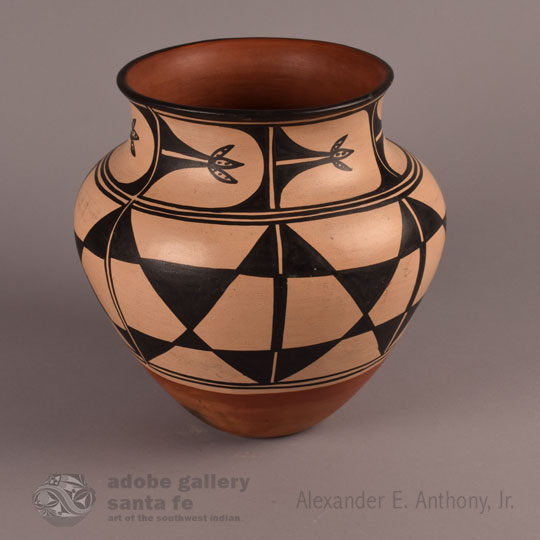 This jar could possibly be one of the early attempts by the Aguilar sisters—Felipita Aguilar Garcia and Asunción Aguilar Caté—to create innovative pottery designs.  The designs are based on a foundation of traditional Santo Domingo geometrics as seen on other jars of the time. The body of the jar is divided into boxes, each of which contains a series of stacked black triangles—a very traditional approach.  The neck, too, contains the tulip design seen on jars of the time, but here is where the two potters deviated from tradition—a slight but noticeable. Inserted into the flower of the tulip are three seed pods, or perhaps ears of corn. This particular design choice was not being used by other potters of the time.  It is a small deviation, but an indication of things to come.

The rim is black and there are framing lines and double framing lines separating the design areas.  Also, in a very traditional manner, there is a ceremonial line break throughout the entire design, including the framing lines but not the rim.  With this jar, we see early hints at the radical innovations that would come later in the Aguilar sisters’ careers.