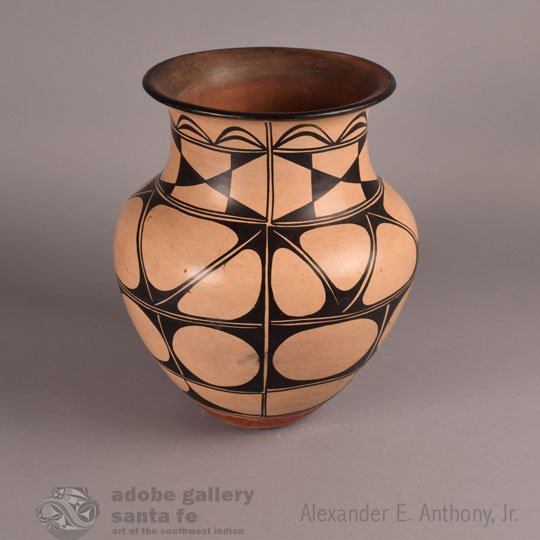 Felipita Aguilar Garcia and Asunción Aguilar Caté are, unquestionably, the best known potters from Santo Domingo Pueblo from the turn of the last century.  They made very traditional Santo Domingo black-on-cream pottery like other potters of the time, but their works were exceptionally strong. There are no other potters from that time whose works are as easily identifiable as those of the two sisters.  The vessel shape, the quality of construction, the creative design concepts and the application of those designs are fantastic.

This is one of the strongest black-on-cream jars that we’ve seen. With its large body, tall neck, and dramatically flaring rim, it is a monumental and graceful piece.  The potter chose to place five separate bands of design over a narrow band of red at the underbody.

The lowest design consists of large cream half circles resting on black pigment.  Their considerable size seems to serve as a foundation for the bands of design that rest above. The design band above the foundation band consists of circles, formed by outlining with black pigment.  Each circle is separated from its neighbor by thin cream lines.

What is probably the most impressive design band is the one just below the neck.  It is comprised of oval cream elements outlined in black within a triangle. As one progresses to the neck, the concept changes to one that presents two totally different styles—the lower one being very traditional black triangles, and the upper one being double arches resembling clouds. It is these clouds that hint at where the Aguilars would head in the future.

Condition: very good condition with very minor rim repairs that were performed in the past by a conservator of the Museum of Fine Arts in Boston.

Provenance: this Historic Santo Domingo Elegant and Graceful Aguilar Pottery Jar is  from a gentleman in Santa Fe

Recommended Reading:  The Pottery of Santo Domingo: a Detailed Study of its Decoration by Kenneth M. Chapman, Laboratory of Anthropology, Santa Fe, 1936.