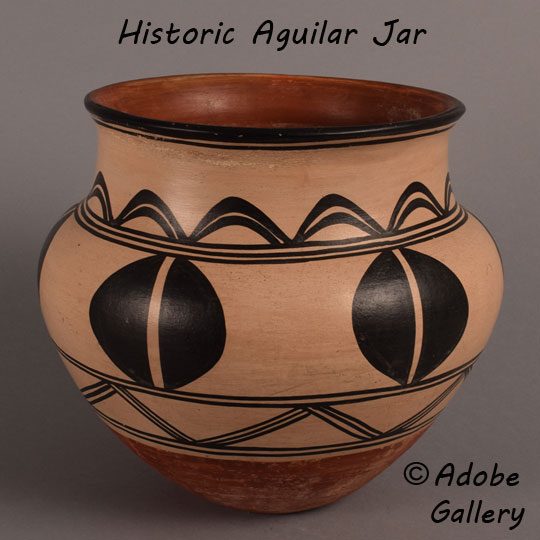 Felipita Aguilar Garcia and Asunción Aguilar Caté are, unquestionably, the best-known potters from Santo Domingo Pueblo from the turn of the last century. They made very traditional Santo Domingo black-on-cream pottery like other potters of the time, but their works were exceptionally strong. There are no other potters from that time whose works are as easily identifiable as those of the two sisters. The vessel shape, the quality of construction, the creative design concepts and the application of those designs are fantastic.

As a matter of record, Kewa Pueblo potter Robert Tenorio told us that the sisters should be referred to as Cate, not Aguilar. He said the males of the family, who were Aguilars, were the ones who went out from the pueblo to sell the pottery resulting in it being recorded as purchased from Aguilar. That name has been associated with their potter for a hundred years or more, so it is unlikely to ever change.

This is one of the exceptional black-on-cream jars by the sisters. With its wide body, short stature, and flaring rim, it is a graceful piece. The potter chose to place three separate bands of design over a traditional band of red at the underbody.

The lowest design consists of a zigzag pattern consisting of three black lines. This narrow band is framed by upper and lower pairs of lines. The design band above the foundation band consists of black circles with a cream vertical dividing line. The third design bank is around the neck of the jar and consists of cloud elements, typically seen on water jars. It is these clouds that hint at where the Aguilars would head in the future. The entire design is penetrated by a ceremonial break from rim to underbody.

Provenance: this Historic Santo Domingo Black-on-cream Aguilar Jar is from a private collection

Recommended Reading: THE POTTERY OF SANTO DOMINGO PUEBLO: A Detailed Study of its Decoration by Kenneth Milton Chapman