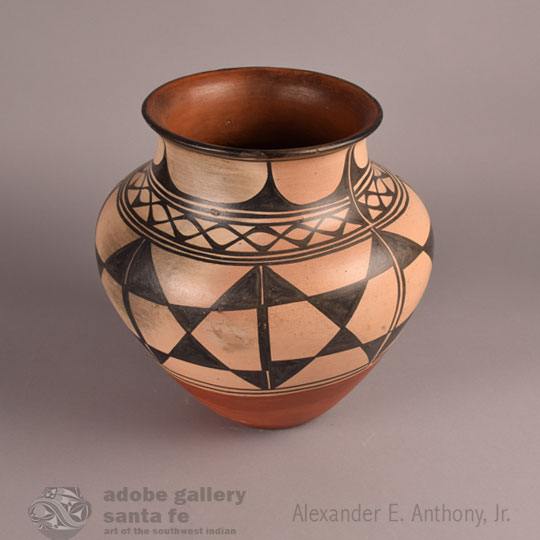 The Aguilar sisters—Asunción Aguilar Caté and Felipita Aguilar Garcia—and their sister-in-law, Mrs. Ramon Garcia, were exceptional potters in the late 19th and early 20th century periods at Santo Domingo Pueblo (now Kewa Pueblo).  They followed tradition in their early works, in that designs on their pottery were typical strong black geometrics on creamy white slip. Here, we see one of the earlier works that begins to show innovation in a minor manner, that is, the sinusoidal band around the neck just above the shoulder.  This extra band of design is an indication that the potter was beginning to break from tradition.

The body design is composed of black triangles arranged in varying forms but if one concentrates on a specific element, it appears that stars are the result of the arrangement of the triangles.  The neck designs are half circles, created by placement of black pigment. Between these two design bands is the sinusoidal strip. There are double framing lines in three locations, a black rim, and a very wide red wiped-on band below the design panel.  There is a faint fire cloud on one side of the jar.