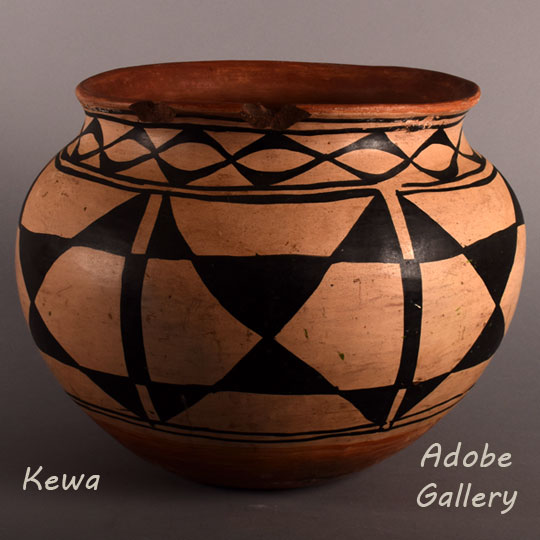 When considering the posted dimensions, this jar appears to be average in size, but in person, it is quite substantial.  It is a true storage jar.  The bottom is flat, as is traditional with storage jars and dough bowls.  For a large jar, the shape is graceful, not bulky.  The neck rolls outward at the rim, and the potter chose to place a double sinusoidal curve on the neck.  The body design consists of traditional black triangles, arranged in a six-pointed star.  The jar is very traditional in shape and design, but is outstanding in appearance.  It does not have the name of a potter.

All this above information is meant to lead us to see if we can make an attribution of this jar.  The black triangle six-pointed star design around the body of the jar has appeared in almost identical form on many Santo Domingo bowls and jars since the late 1800s, so many, in fact, that it cannot be used to identify a potter by name.  Perhaps the sinusoidal design around the neck could be a hint to a potter or a family who used this, but there is no documented example in published form with a known potter identified.

We need not know who the maker of a jar of this magnificence was for us to appreciate and enjoy it.  The shape of the vessel is excellent, providing a large area on which to paint the body design. The small or short neck enhances the largeness of the body.  Storage jars rarely indicate wear from having been used because they generally were used for dry items, not water, so no stains resulted.  It is difficult to determine if this one had been used at the pueblo before having been sold.  We just must appreciate the excellence of the jar without knowing the maker.

Provenance: this Historic Santo Domingo Polychrome Traditional Storage Jar is from the collection of a gentleman from Taos, New Mexico