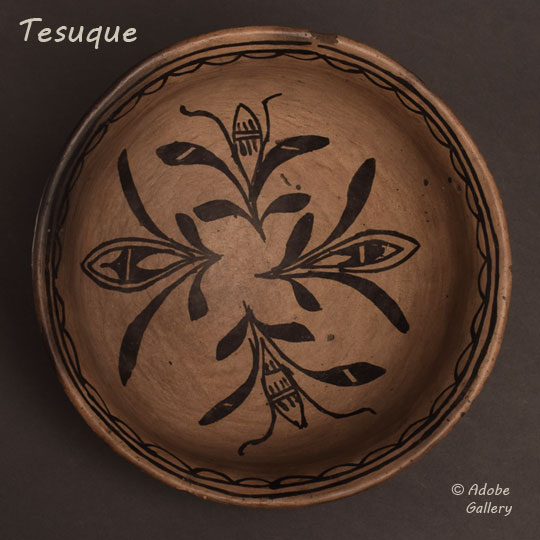 This historic pottery bowl was created by an unknown Tesuque Pueblo artist. We'd date the piece to the early 1900s, a period during which most Tesuque's potters were making their works specifically for the growing Santa Fe market.

Many of these artists made Rain Gods and other commercial inventions. Some made pieces which, like this bowl, closely resemble utilitarian forms but also display some sort of market-friendly modification. In this case, that modification is the base of the piece, which curves outward slightly before ending at a flattened surface. It elevates the bowl just a bit and enhances its visual impact, so we'd say that the modification was a success.

Two parallel lines and a band of rain clouds circle the interior rim. Four plant designs emerge from the center, with each growing toward one of the four directions. The interior displays the typical black-on-cream colors while the exterior displays a beautiful muted red tone. Fire clouds appear around the exterior, varying in intensity as they circle with the red slip. There is much depth and beauty in this seemingly simple polished exterior, and it is a treat to explore the lasting visual record of natural elements interacting with one another. This is a beautiful example of early 1900s Tesuque pottery.

Condition: excellent condition. Light wear from use, small chips, and abrasions around rim.

Provenance: this Historic Tesuque Pueblo Pottery Bowl with Rain Cloud and Plant Designs is from a private New Mexico collection