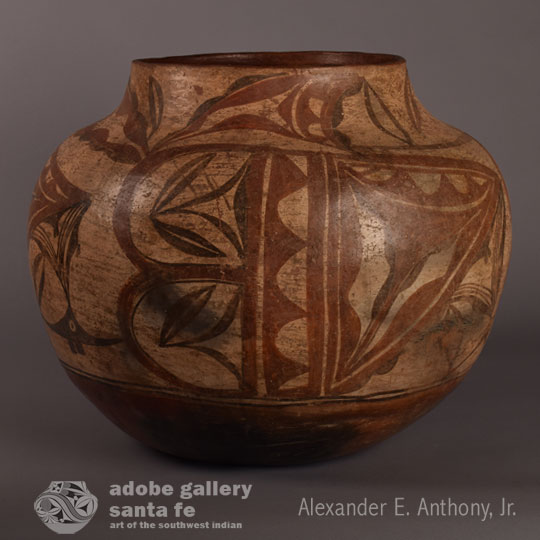 The transition in typology from Trios Polychrome to Zia Polychrome began around 1840 and continued for almost one hundred years.  More specifically, the transition for those with geometric designs occurred between 1840 and 1890. Assigning dates to jars is rather arbitrary, as most jars contain design elements of several categories.  When Francis Harlow commented on this particular storage jar, he estimated it to date to 1860.

One of the features of jars of the mid-1800s is the overall layout with no division between body and neck design.  This is one of the defining characteristics of jars of this period. The maximum diameter of the body is just above the mid-point, the neck is just slightly concave, and the base is wide and flat.  The red design elements are, for the most part, not outlined in black pigment. The lower body below the design is highly polished and has a wide wiped-on red band. The rim is red and the red flows into the interior rim.

The design has a distinctive Santa Ana Pueblo influence.  The jar’s most distinctively Santa Ana trait is the aforementioned absence of black outlines around the design elements.  Most Zia potters would paint thin, precise outlines around their designs. Its colors, too, could suggest Santa Ana, but the paste confirms a Zia Pueblo origin.  Santa Ana and Zia are neighboring pueblos, and cross cultural influence is not unusual.

This storage jar is exceptional in every way.  Its designs are amazing. As mentioned above, there is no separation between body and neck designs. The jar’s single design band extends from the rim to the underbody, covering more than three-quarters of the jar’s surface.  This band contains three repetitions of a striking, unusual form—a reversed capital “B” shape, attached to a vertical band of semicircles, attached to a large triangular element. These atypical frames contain smaller elements, most of which are traditional Zia images.  Above this primary design, on the jar’s shoulder and neck, is a series of triangular and split-leaf elements. This jar’s creator did an exceptional job combining ancestral designs with ideas of her own creation. Her work here is strong and unusual, but doesn’t feel stifled or unnatural.  These designs are at once methodical and expressive, flowing freely into and around one another as they circle the jar’s substantial surface. This is a masterful display of personal expression that will undoubtedly appeal to those who appreciate the very finest in pueblo pottery.

Condition: excellent condition.  The jar shows wear from use, and has no significant cracks or chips.  There is one minor BB shot hole in the side (see image below). The jar has been examined under a blacklight and shows no signs of restoration or repair.

Provenance: this Historic Zia Pueblo Pottery Storage Jar, circa 1860 is from a rivate New Mexico collection