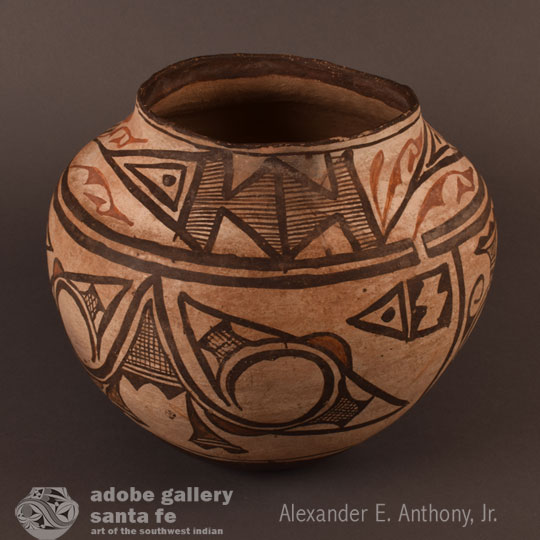 Late nineteenth-century Zuni Polychrome jars have a rather consistent layout pattern after about 1880—two large designs on the body separated by narrow vertical designs framed within boxes.  The neck design is a single element repeated three times.

The body on this jar features a pair of capped spiral designs connected by lines that intersect at the upper framing line.  Between the pair of spirals is a checkerboard triangle from which are suspended two polychrome rain clouds. Separating these large body designs is a pair of double ended scrolls arranged in a vertical position and enclosed between a pair of wide brown lines.

Very little red appears in the body design and slightly more is in the neck design.  The dagger design seen on the neck is represented by the black outlined neck filled with fine lines.  The dagger has a long bird’s-like beak and eye. According to Zuni informants, the dagger represents “the thunder knife which priests use in many ceremonies.” [Lanmon & Harlow 2008:171]

Earlier Zuni Polychrome jars, such as this one, have less red in the design than those after 1900. This jar most likely dates to circa 1890s.