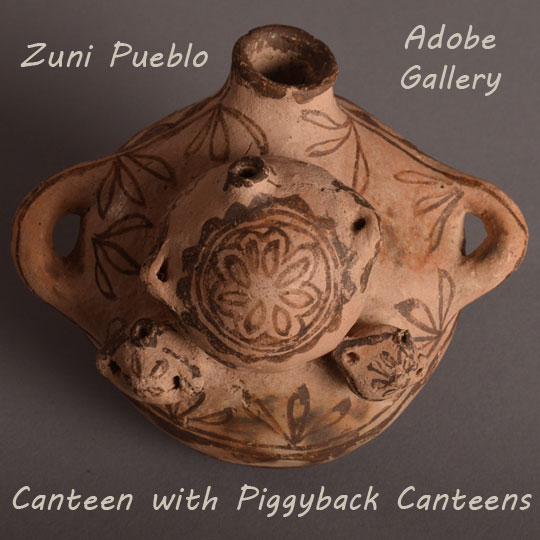 This historic Zuni Pueblo pottery canteen is somewhat unique in that it has three other canteens riding piggyback on its top. The piggyback canteens are physically opened into the major canteen chamber because there are no significant outside openings in the smaller ones to allow gas to escape during firing. The large canteen was the major source of air escape for all four during the successful firing process.

The three smaller canteens are decorated with traditional Zuni medallion designs. The major canteen has a display of leaves grouped in threes. The bottom of the major canteen is dark brown pigment in traditional Zuni style. Generally, Zuni ceramics of this period are chunky in texture with surfaces that appear more porous than smooth. This canteen ensemble, however, has a wonderfully smooth surface without any elements of chunkiness. The potter worked the clay to obtain the finest texture in the finished product.

The design executions at this late 19th century period are generally less crisp, light, and precise than those of twenty years earlier. In this instance, the elements are heavier, with less focus on the fine-line contouring and subtleties of earlier works. Graphic and bold are two terms most suited to this late design-period. The designs of this canteen were executed in dark brown pigment over stone-polished white slip, with no use of red pigment. The canteen dates to circa 1880.

According to Harlow and Lanmon, "This form was apparently rather popular, many of the examples we have examined look as though they were well used when collected for the BAE between 1879 and 1884. We have no examples likely to have been made after about 1885." [Harlow & Lanmon, 2008:351]

Condition: very good condition for a vessel of this age.

Provenance: this Historic Zuni Pueblo Nineteenth Century Pottery Canteen with Piggyback Canteens is from the collection of a gentleman from Colorado

Reference: The Pottery of Zuni Pueblo by Dwight Lanmon and Francis Harlow