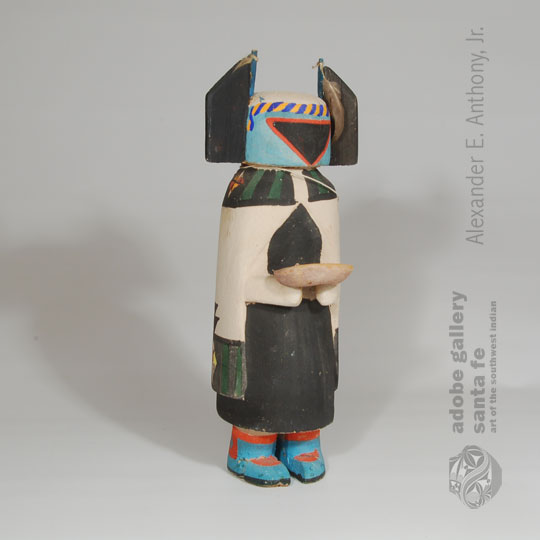 There is some confusion concerning Angwushahai-i (Crow Bride) and Angwusnasomtaqa (Crow Mother).  They are the same katsina but serve different functions.  In either guise, she is a figure of great dignity.

As Crow Bride, she performs a role quite apart from her appearance as the Crow Mother.  There is a legend that relates her journey as a bride and her return as a married woman. As the Crow Bride she appears at second dawning to the east of the village and moves slowly toward the town bearing in her hands a large tray of corn sprouts.  Entering the village, she pauses and begins to sing in a subdued voice.  Completing the song, she moves sedately forward to another point and again pauses to repeat the performance.  At each pause women come forward to take one of the corn sprouts from her tray and to cast meal upon her.  Her slow progress eventually brings her at full dawn to the Chief Kiva where the kiva chiefs await her.  In some villages, she is joined by Eototo and Aholi to whom she gives prayer feathers and meal.  She then makes her dignified way out of the village and disappears toward her home in the San Francisco Peaks.

As Crow Mother, she appears on all three mesas, usually in connection with the initiation of the children, although she also appears on other occasions.  At the initiation rites, she descends into the kiva bearing a large number of yucca blades bound together at the base.  She takes a position at one corner of the large sand painting on the floor of the kiva, with one of her “sons” on either side of her.  As the candidate is brought to the sand painting she hands a whip to one of the Hú Katsinas who gives the child four healthy strokes with the yucca blade.  When the yucca becomes worn it is handed back to the Crow Mother who then supplies a new one.  When the initiatory whipping is over, she raises her skirts and receives the same treatment accorded the children.  They are then given prayer feathers and meal and leave the kiva.

This caving appears to be the work of Jimmy Koots. a well-known carver of katsina dolls in the Santa Fe area because his dolls were featured at a shop called Rare Things by Dutton in downtown Santa Fe for years. His full name was James Kootshongsie. He had a fascinating life and we have printed information from the book Hopi Katsina 1,600 Artist Biographies by Greg Schaaf. To see this biography, click on the artist’s name just below the picture of the Katsina doll.  The descriptions above on the two versions is based on Barton Wright’s book referenced below.

The attribution to Jimmy Koots is based on the pigment color of the white manta and head of the doll.  Koots had a distinctive grayish tone to his white pigment and this carving resembles the color of that pigment used by him.  It appears that the carving dates to the 1940s.

Condition: very good condition for its age.  The fronts of both feet have been broken off and glued and one of her black wings appears to have been glued.  Minor paint abrasion

Provenance: Hopi Angwusnasomtaqa - Crow Mother Katsina Doll from the collection of a family from Santa Fe 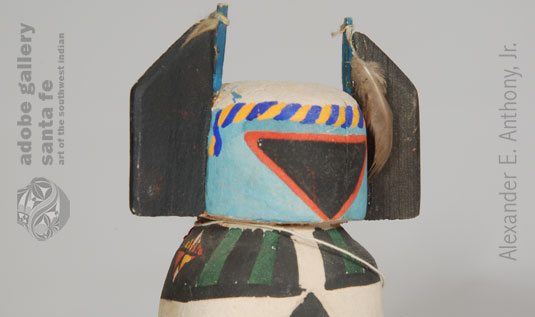