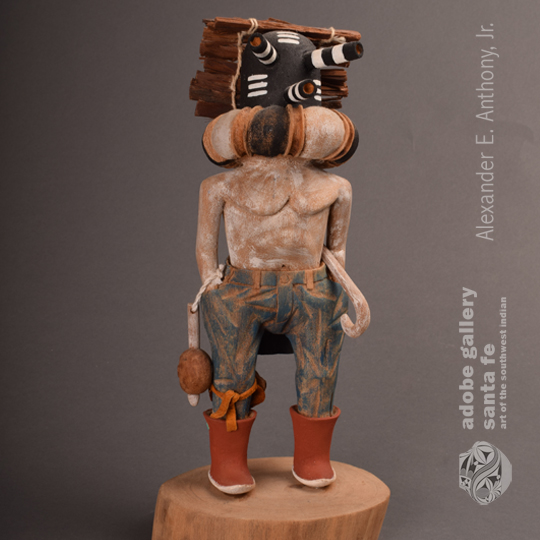 Kwikwilyaka is the Mocking Katsina.  As a clown he has little personality of his own but fastens like a leech onto any activity that catches his eye.  With mirror-like accuracy he will reflect every action of the unfortunate whom he decides to mimic. He drives the other katsinas such as Hó-e to strong measures to rid themselves of this unwanted echo.

Should a person in the audience become the focus of this undesired attention, he must wait until something else diverts the katsina.  The wait is very difficult without inadvertently making some movement, and the rapidity of the mocking usually produces gales of laughter from the rest of the audience.  During the Bean Dance procession, he is a foil for the Hó-e and an annoyance to others.

Kwikwilyaka appears in ragtag costume with a bundle of cedar bark for hair on his head.  Many times, the Hó-e will rid themselves of this personage by pretending to set its hair afire. When Kwikwilyaka mimics this action, he actually sets his own hair afire.

This carving by Paul Myron, of the Hopi village Kykotsmovi on Third Mesa is an all-wood carving. He is shirtless and wearing Levis and traditional pueblo moccasins. His long tubular eyes and mouth are often the recipients of a poke with a stick by the assailant he has been harassing.  He carries a cane and a gourd rattle. Tied to his right calf is a turtle shell.

The carving was executed beautifully.  The trousers, tucked into his moccasins, are creased and faded as one would expect of old Levis.  The mask, which appears oversize, is in perfect scale to the doll. It may appear oversize but that is because it has to be larger than the human head over which it rests, something that many carvers fail to achieve, but was perfectly done on this one.

This is an excellent presentation of Kwikwilyaka, one of the best we have seen.  It most likely dates to the 1990s or early 2000s.

Provenance: from the collection of a gentleman from Texas who used to travel the reservations with his uncle while the uncle purchased from artists.  After the uncle passed away, he left his collection to his nephew, the current owner, who has more items than he can accommodate, so we will be posting a number of items of pottery and katsina dolls from this inheritance soon.