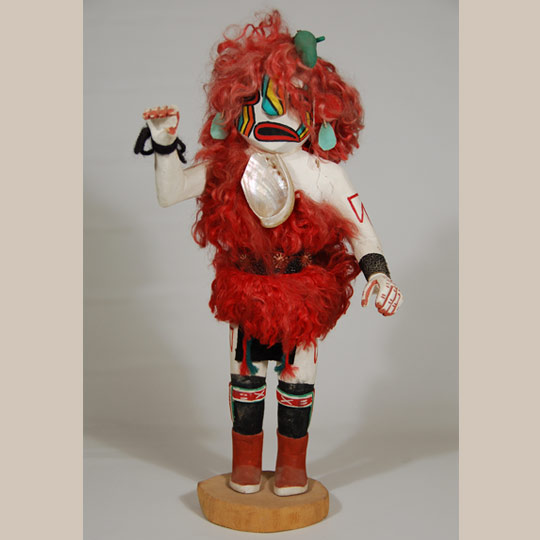 According to Barton Wright, Heheya Aumutaka means "like Heheya" and this version of Heheya appears only on Third Mesa.  Other versions appear on First and Second Mesas.  He is a relative of the Ogres, although he himself is not an Ogre.  The interesting thing about this Katsina is that he speaks the opposite of what he means. If he says something is "good," he means it is "bad." Formerly he accompanied the Soyoko when they appeared on Third Mesa but since the Soyoko no longer come, his role is shifting to that of a general Powamu Katsina.

This version of the katsina is covered with dyed goat hair over the head and body. He has two green chiles on his head, a real sea shell around his neck and earrings and ketoh.

Condition: there is a crack at the junction of the left shoulder otherwise it is in very good condition.

Provenance: this Hopi Heheya Aumutaka Katsina Doll signed Mike is from the estate of Tom Mittler, a former resident of Michigan and Santa Fe who purchased it from Kachina House in Santa Fe in 1986 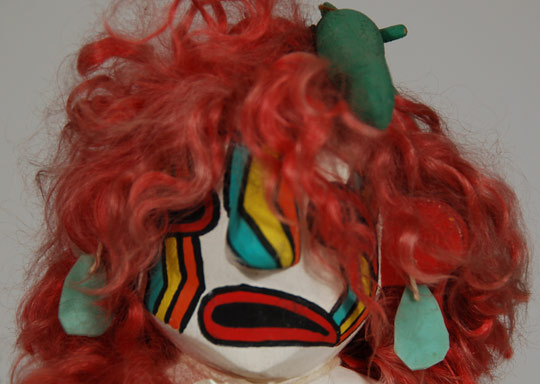