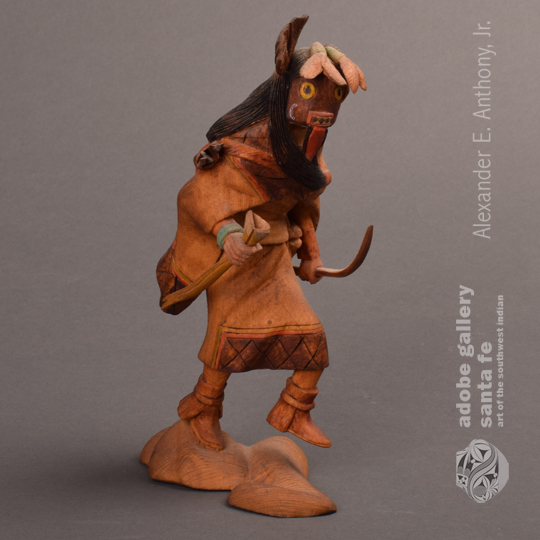 “Hé-é-e or Hé’wuhti may be seen in Powamu celebrations most years, but it is at the Pachavu ceremonies that Hé-é-e is seen in her most impressive appearance.  This kachina is the Warrior Maid, based on the story of a young girl.  Many years ago, tradition says that some Hopis were living outside of the main village, and the mother of this household was putting up her daughter’s hair.  The mother had finished only one side of the hair whorls, the hair on the other side still hanging loosely, when they saw enemies sneaking toward the village.  The daughter snatched up a bow, quiver and arrows from the wall and raced toward the village to warn the people. She then led the defense until the men in the fields could return and rout the enemy.

“She has been personated ever since as a kachina and always appears with her hair partially up on one side and hanging down on the other.  On the back of her head she wears an artificial scalp lock, and she carries the weapons she snatched up so long ago.  She still guards the village.  During Pachavu times she gives the signal that drives everyone indoors when certain ceremonies must be performed out in the open.  And it is she who leads the horde of hooting, jangling, threatening kachinas along the line of procession into the village in the final moments of the ceremony of Pachavu.”  - Wright 1973

As usual, Brian Honyouti, from Hopi Pueblo, presented this doll as a one-piece carving, with the hand-held items and possibly the pair of feathers on the head being added.  Brian was one of the best carvers on the reservation and had been for several decades.  This is an excellent example of his very fine carving of a doll in a smaller scale.

Reference:  Kachinas: a Hopi Artist’s Documentary by Barton Wright with original paintings by Cliff Bahnimptewa.  This book is currently not available from Adobe Gallery.

Provenance: from the collection of a family from New York who purchased it in the 1990s.