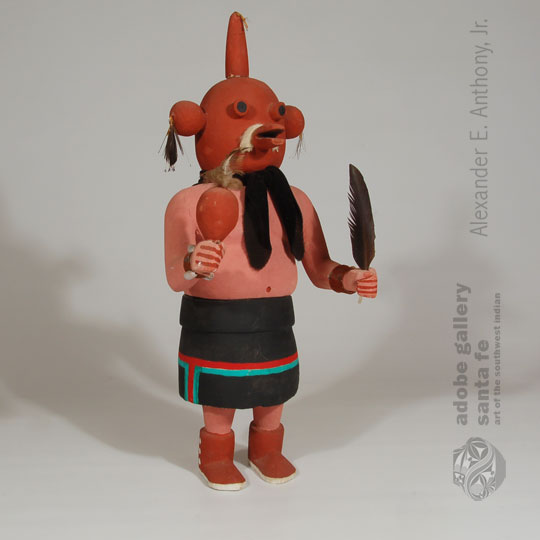 When Popovi Da passed away in 1972, Anita Da continued operating the Popovi Da Studio of Indian Arts that she and Popovi had opened in 1948 at San Ildefonso Pueblo.  She continued operating it until sometime around 1982, at which time she sold the large collection amassed by Popovi of pottery by his parents to the Millicent Rogers Museum in Taos, then packed up the remaining inventory and put it in storage.  Anita passed away in 2005, and her estate was distributed to family members. One granddaughter inherited a large amount of jewelry from the Popovi Da Studio of Indian Arts as well as other items, among which was this Mudhead Katsina Doll.

It is not unusual for this doll to be called a “Mudhead Katsina” or a “Koyemsi” as those are names that have been used for a hundred years or more.  Barton Wright states that it is not considered a katsina at Hopi and that Mudhead and Koyemsi are both nicknames. Wright states that Tachukti is the correct name, Tachukti being the name of a clown, however, Wright says that they are not clowns in the sense we normally consider a clown.  It will, however, always be called a Mudhead as that name is not likely to go away.

At Hopi Pueblo, he is a curer, magician, dance director, warrior, messenger, sage or even a fool.  He also may appear in the guise of any katsina by donning the clothing of that katsina. The Koyemsi appear as interlocutors between katsinas and humans. They serve religious and secular functions. They function as chiefs and as clowns at various times. They are probably the most popular and recognized of all masked dancers. They appear in almost every ceremony as clowns, drummers, announcers of dances, and many other roles.

This carving of the Mudhead, is an excellent example of the finest workmanship on such a carving.  The body features were rendered to scale, beautifully carved and painted. It is typical of the style carving from the mid- to late-20th century.  It was not signed by the carver.

Provenance: from the estate of Anita Da, who passed away in 2005.  Her personal items were passed on to members of her family.  This doll was passed on to a granddaughter, the current owner.

Reference:  Clowns of the Hopi: Tradition Keepers and Delight Makers by Barton Wright 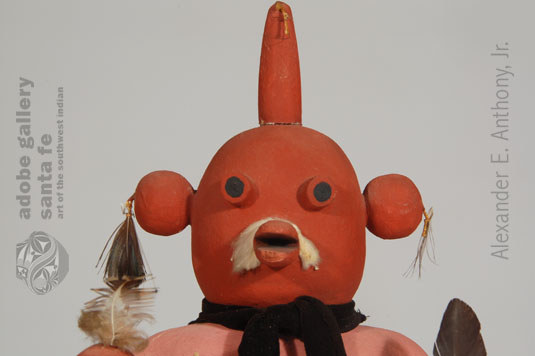