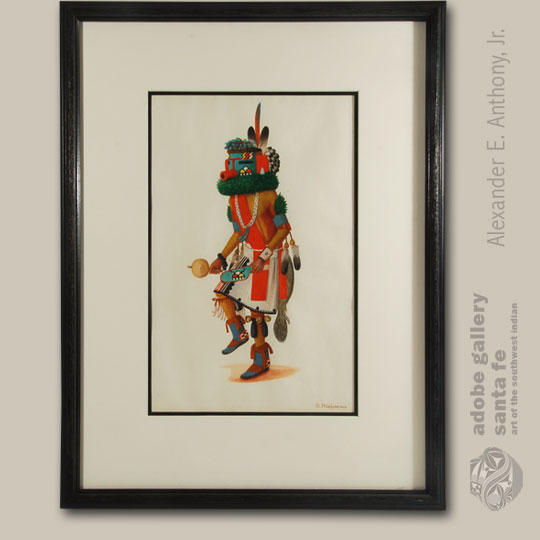 Otis Polelonema (1902-1981) Loadamosiva - Springtime really strived for detail in his paintings and this one is no exception. He believed his experiences at Santa Fe Indian School and his contact with Mrs. Willis DeHuff encouraged him the most in the art field. He began painting around 1917.

Several boys, while still in school, received encouragement after class from Superintendent and Mrs. De Huff in their home at the Indian School.  Among them were Ma-Pe-Wi, Fred Kabotie, Otis Polelonema, and Awa Tsireh. Dr. Edward Lee Hewett said of them "these young Indians were simply protected from learning art by our methods and enabled to go on in their own way in which no one can teach them."

Dorothy Dunn stated that Polelonema was a strong artist and a true primitive and these facts jump straight to the eye. She further stated "Much of the charm of the paintings is inherent in their straightforward and rugged naiveté.  They reflect the artist's ability to override rules to the direct creation of his own techniques and devices in the matter of such bugaboos as perspective, light and shade, and color theory. He masters them all, and how delightfully.”

After leaving the Santa Fe Indian School, Polelonema attended Santa Fe Public High School for one year, then returned to his home village of Shungopavi at Hopi Pueblo, where he spent the remainder of his life.  He became involved in traditional Hopi activities. He never painted as often as he had done in the 1930s although he did paint occasionally until the mid-1970s. He passed away in 1981 during the annual Solstice ceremony celebration.

Condition: this Hopi Painting of a Kuwan Heheya Katsina is in original condition

Provenance: originally from the collection of Santa Fe dealer and collector, Richard M. Howard, for whom we sold it to a family from Santa Fe in 2004.  We now have it back from the Santa Fe family who is consolidating two homes into one and found it necessary to downsize their art collection. 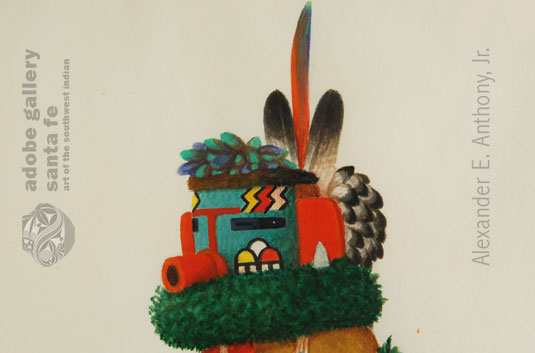