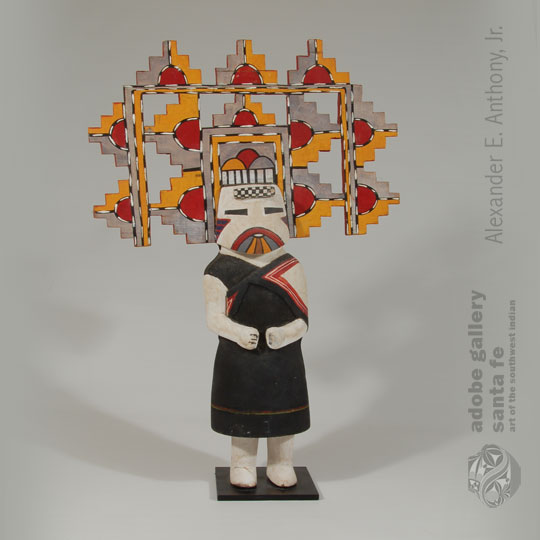 Palhikmana is a female katsina or katsina maiden to whom is inscribed several functions.  She appears during Angk’wa as a Butterfly maiden or Corn-Grinding maiden.  She also appears in the performance of a special dance.

Angk’wa is a ceremony which encompasses the entire month of March during which a series of night dances is performed in each Hopi village.  These rituals will continue until sometime in July when the katsinam season ends and the katsinam return to their home in the San Francisco Mountains.

The night dances start well after dark on the day designated in each village.  The people wait in the kiva until they hear the noises of the coming katsinam.  Some of the katsinam approach the kiva and shake their rattles, signifying that they are here for the people. They are then invited by the kiva chief to enter the kiva.  Once inside, they give the people gifts—mostly food of the type that will grow in the summer.  The katsinam then perform a lively dance in the kiva as a prayer for all life forms.  This is one of the dances for which the Palhikmana may perform.  It is a colorful dance usually with four pairs of maidens and their male partners.

The Palhikmana are part of the Mamznau society.  Their dance is one of the most beautiful with their towering tabletas topped by clouds of eagle feathers.  Their movements are graceful and slow.

This Hopi Palhikmana - Butterfly Girl Katsina Doll appears to be circa 1930s or 40s and was painted with matte paints, an indication of such an age.  Her hands are attached to her trunk in the fashion of those dolls from the 1930s and earlier.  The tableta was made from crate wood, not plywood, another indication of the earlier age.  As is traditional, there are rain clouds and rain on her tableta and a rainbow on her chin.  She is wearing the traditional black manta with a shawl draped over her shoulders.  The tableta was made separately and slips into slots on the head of the doll.

Condition. very good condition with repair to her right foot.  A metal stand is provided for secure standing.

Provenance: from a collection in Canada through a resident of Santa Fe 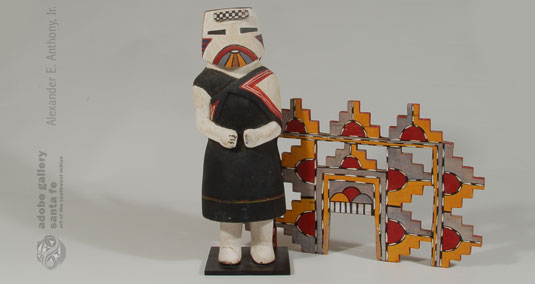