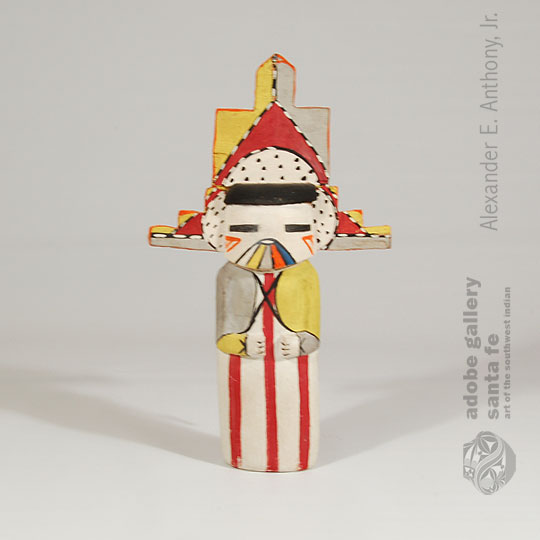 The Palhikmana is one of the more spectacular Hopi Katsinas because of the large and elaborate tableta on her head, as well as the rainbow decorations on her chin. She is a maiden with several functions. She may appear in a katsinam function as a Corn Grinding Maiden, or as Salakomana in a dance with the Salako Takas, or as a non-katsina in the women’s social dances.

This doll is presented in the flat style made for presentation to infants and very young children.  She carries the red stripe body of the Hahai-i-Wuhti Katsina, which is generally the first doll given to an infant.  Perhaps that is the relationship between the different katsina flat dolls and Hahai-i-Wuhti.

The feathers that traditionally extend from the ends of the tableta and behind the head have been removed in accordance with U.S. Federal Regulations.

Condition: this Hopi Palhikmana Flat-style Katsina Doll is in very good condition.  There has been no known repair or restoration or re-painting.

Provenance: from the extensive collection of a family from Oklahoma, which purchased it from Arrowsmiths, Santa Fe dealer, in 1998. 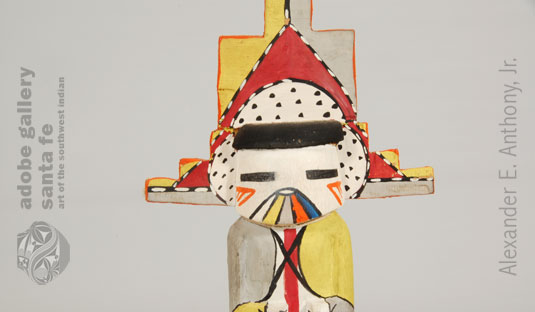