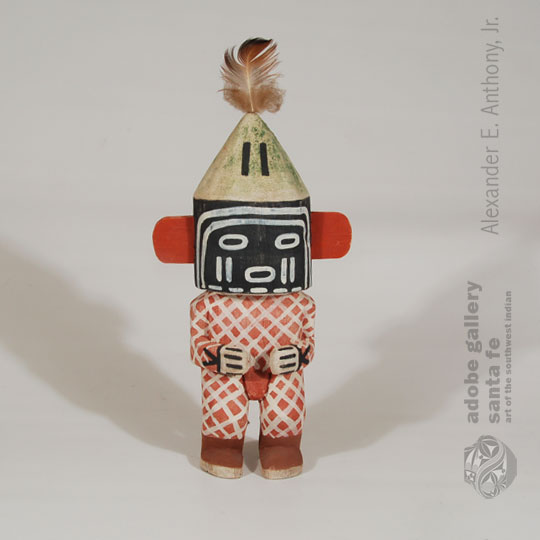 “The Religion of the Hopi Indians in certain ways resembles that of the ancient Greeks.  It is polytheistic, because there are many gods, and animistic because of the belief that all animate objects, plants and animal as well as some inanimate things, have spirits that the Hopi visualize in human form.  When a Hopi goes out to gather yucca roots to use as a shampoo, the first plant he finds, he prays to and passes by, gathering the second one. When he goes hunting he prays to the spirit of the game and apologizes for having to take their lives.

This doll is believed to represent one of the two little War Gods—Pö-ökang-hoya.  The other one is Palö-ngao-hoya.

“Twin gods, grandsons of the Spider Woman, mingle with the people and play tricks on them, but if the people are in trouble, they appeal to their wise grandmother who shows them how to outwit evil. They are sometimes impersonated and the people who take part in the ceremonies keep images of them in their houses.  They are not associated with any particular ceremony, but may appear in several, nor are they impersonated by members of any particular society or clan, but by anyone who is selected.

“Both war gods are depicted as young boys, but yet as warriors.  Pö-ökang-hoya wears a skull cap with feathers. His face is painted black with two vertical white lines, warrior symbols, on his cheeks, and with white around the mouth and eyes; body paint, Supai red with two white spots on each arm, two on the chest and two on each leg.  He wears a black breech clout. He usually carries a quiver of arrows, a bow and a lightning device.” Colton 1949

Philbert Honanie lives in the Hopi Pueblo village of Hotevilla on Third Mesa.  He has received many awards from all venues featuring Native art. He has entered his carvings in many exhibitions in Arizona and New Mexico.  His awards have been given mostly because his carvings are of the old style and were painted with natural pigments. He is also known as an exceptional jeweler.  This doll is signed with the initials PH and dated 1997. Schaaf 2008

Condition: this Hopi Pö-ökang-Hoya Deity Figure is in excellent condition

Provenance: from the estate of Santa Fe collector and dealer Martha (Marti) Struever who passed away in August 2017.

- Colton, Harold S. “Hopi Kachina Dolls with a Key to their Identification” 1949 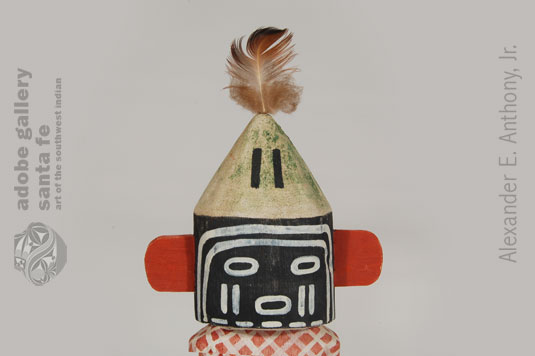