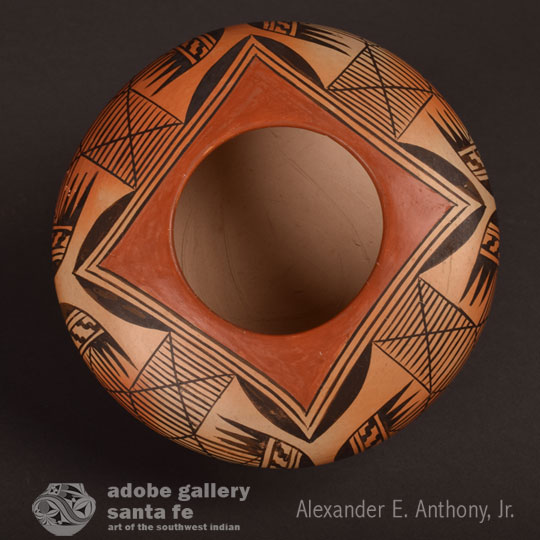 This jar by Elva Tewaguna Nampeyo was beautifully formed of native clay from the Hopi village and the paint acquired from mineral sources around the village.  There was nothing commercial used in the making of this vessel. It was fired in the traditional outdoor firing technique practiced by the Hopi for centuries.

The design has been referred to as a bat wing and is often used with an orange square surrounding the opening from which four bat-wing designs are appended.

Elva Tewaguna Nampeyo (1926-1985) was the granddaughter of Nampeyo of Hano and daughter of Fannie Nampeyo.  She has been gone for over 30 years now so there are not many of her wares on the market, and there certainly are not many of this magnificence.  She was an exceptional potter and her work never deteriorated later in her life when she became ill. She certainly was one of the exceptional potters of her generation.

Elva was the mother of a family, most of whom also became potters.  Her daughters were Miriam, Adelle, and Neva and her son was Elton. Elva's siblings were also potters.  They were Leah, Harold, Tonita, Tom, Ellsworth, and Iris.

Provenance: this Hopi Tewa Domed Top Polychrome Pottery Seed Jar by Elva Tewaguna Nampeyo is from a member of the Maisel family of Albuquerque