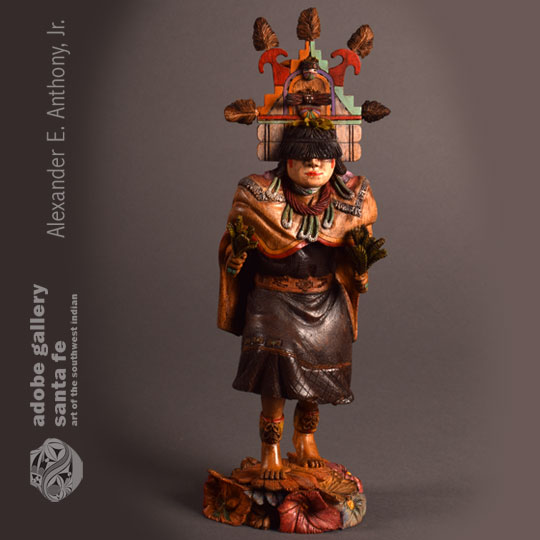 This exquisite carving by Hopi artist Kevin Pochoema is of a Hopi Butterfly Maiden.  It practically defies being described because words cannot convey the beauty of the doll nor the intricacies of the carving and painting.  The details on the tablita, which will be described later, and the coral multi-strand necklace with four jaclas are just the beginning of awe-inspiring details.

Separately from the Katsina Dances performed by the Hopi men during the summer, the women’s society performs non-Katsina dances of their own. One of these dances, and it is one of the most beautiful, is the dance of the Butterfly Maidens.  She is similar to, but different from, the Pahlikmana Katsina, but she wears no face mask as she is not a katsina.

In the Shoshonean language of the Hopi, the Butterfly Girl is known as Poli Mana. She is not a Katsina, but one of the social dancers who comes in the late summer in August. She does not wear a face mask, and her eyes are ordinarily covered by bangs of her hair. Only unmarried girls who have no children dance her.  She is similar in all the mesas and villages. Social dances constitute prayers to the katsinas for the benefits of good health and good harvest, and in some sense they are like a harvest dance, similar to a Thanksgiving dance. That is partially why they are performed primarily in August. The girls who are dancing are considered to appear as Butterflies.

The tablita on the head of this carving has a pair of miniature masks of the Pahlikmana Katsina on the front and the mask of a Navan Katsina attached to the back.  The details of these three miniature masks are astounding. The cape draped over her shoulders and hanging down her back is covered in beautiful flowers of varying colors, each one detailed with carving.  She wears a twisted multi-strand coral necklace with four turquoise jaclas suspended from it. She is wearing a pair of turquoise jaclas as earrings as well.

On the back of her head is a bundle of exquisitely carved feathers with one long protruding feather erect upright.  From the bundle of feathers is draped a grouping of yarn of varying colors. She carries carved evergreen branches in both hands.

The black traditional manta has carvings at the hem illustrating the traditional diamond twill edging.  Just over her left knee are three butterfly pins as seen on concha belts. The Butterfly Girl is standing on a pedestal of beautifully carved and colorful flowers with a single butterfly embedded.

One could continue describing each square inch in detail but it is sufficient to state what has been said and leave some details for the eventual client and collector to discover.  This is truly a masterpiece by a masterful Hopi carver.

Provenance: this Hopi Pueblo Butterfly Maiden All Wood Carving by Kevin Pochoema is from the carver