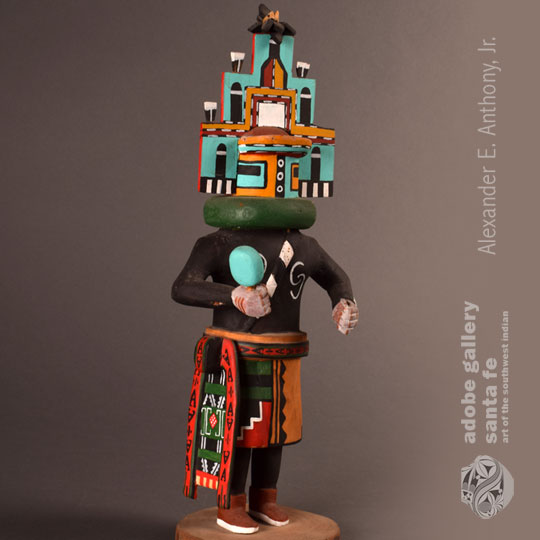 This carving of the Hopi Hemis Katsina is entirely from cottonwood root.  It appears that the body is from a single root, with the tableta, foxtail, arms and sash added to the basic.  It is signed with the name Via Harvey but I have not located a Hopi by that name, the closest I found is Vina Harvey.

The carving of the doll was beautifully executed with good body proportions.  The kilt was left in the natural wood tone, without paint, and the remainder of the doll was painted with acrylic paints.

The Hemis Katsina is probably the best known of all Hopi Katsinas. His elaborate headdress, called a tableta, is partly responsible for his beauty. His body is painted with black corn smut with light colored half-moons on the chest and back. He wears a kilt over which is wrapped a hand woven sash that hangs down the right side. A Douglas fir ruff is wrapped around his neck. The tableta is painted with phallic and cloud symbols and capped with feathers. He appears in the Home Dance or Niman Ceremony. No other katsina, neither clowns nor side dancers, appears with the line of Hemis except the Hemismana.

Condition: this Hopi Pueblo Cottonwood Root Hemis Katsina Doll Carving is in very good condition except for minor feather loss on the tableta

Recommended Reading: Kachinas a Hopi Artist’s Documentary by Barton Wright with original paintings by Cliff Bahnimptewa.  This book is currently not available from Adobe Gallery.

Provenance:  from a former client to whom we sold a number of Katsina dolls in the 1980s although this is not one we sold to him.