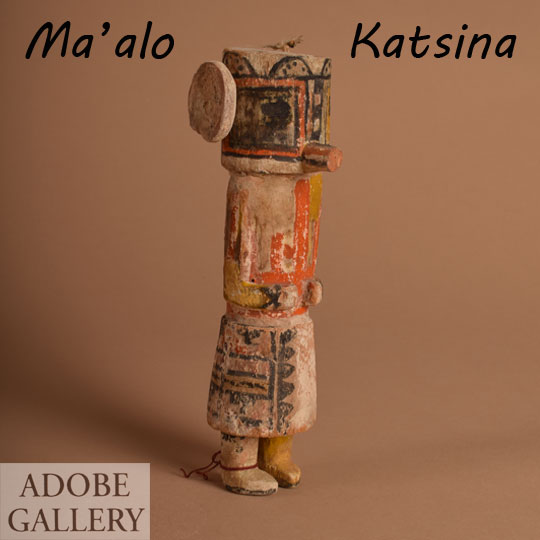 Ma'alo Katsina was one of the most popular of the katsinam in dances around 1900. He was often in the Niman dances along with Hemis, Angak'china and Kuwan Heheya. He usually appeared with Takursh Mana as his sister, dancing in a separate line alongside him. For some reason, he is not often seen in dances today. This is not unusual in that katsinas appear and disappear from time to time.

This carving is from a single piece of cottonwood root, as is traditional. The only additions would be the squash blossom ear and the snout. The short legs, long torso, arms tucked into the body and the larger head are typical of dolls from the 1930s. Feathers on top of the head were secured by drilling a hole and inserting them into the wood, a very early technique. Feathers secured on the left of the face are no longer there, having been removed in accordance with federal regulations.

Condition: some paint abrasions.  The light green paint on the back of the head and on the torso and back appears to be a mineral source.  The blossom and snout have been professionally replaced.

Provenance: this Hopi Pueblo Cottonwood Root Ma'alo Katsina Doll is from a gentleman in Albuquerque

Reference: Hopi Kachina Dolls: With a Key to Their Identification by Harold S. Colton