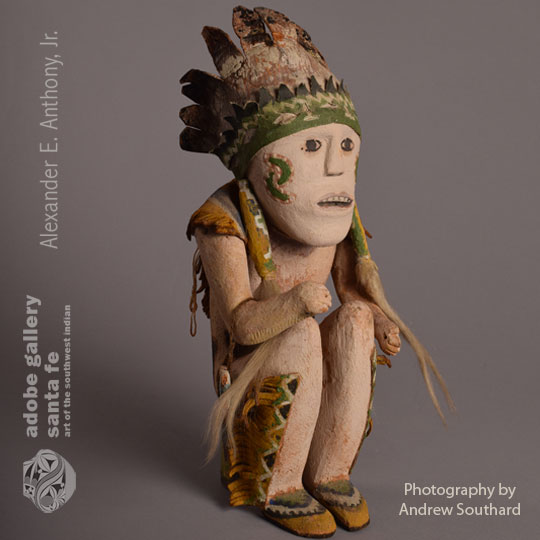 This is an extremely rare early twentieth century wood carving by a Hopi artist of an Apache Indian man.  It is not a Hopi Katsina doll but is a carving representing a member of another Native American tribe. Perhaps it was intended as a work honoring the Apache.  It could possibly represent a visitor to the pueblo who was there to see a katsina dance ceremony.

What an amazing folk art carving by an early Hopi artist.  Such carvings are rare. It is quite likely that this was carved by an older Hopi man who preferred not to carve katsina dolls to sell to tourists as he believed  those were for Hopi ceremonial use only. The traditionalist Hopi objected to outsiders prying into Hopi religion yet the need for money was an incentive to make objects to sell but not in violation of their beliefs.  A logical solution was to carve something not of a ceremonial nature such as this carving.

Another event in the early twentieth century that had an effect on katsina doll sales was that oppressive government agents tried to restrict the Hopis' religious and cultural rights.  In 1934, however, due to the Indian Reorganization Act, the Hopi people got back their religious freedom, and thus renewed their interest in kachina doll carvings. During that repressive period, carving of non-katsina figures was probably actively pursued as a money making source.

Condition: this Hopi Pueblo Seated Folk Art Carving of an Apache Indian Man is in very good condition for its age.