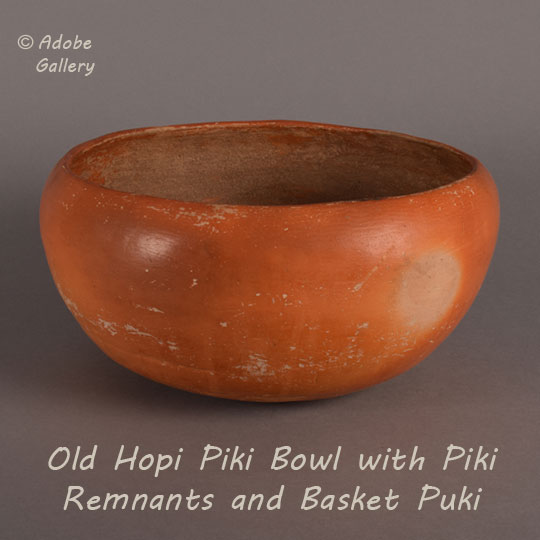 This utilitarian bowl was made by a Hopi-Tewa potter for the express purpose of holding liquid piki in preparation for making piki bread. The piki solution is a beautiful blue color and there is a large residue of it on the interior wall of the bowl. The rim of the bowl curves inward and is used to rub the piki maker's hand for removing excess liquid piki after skimming one's hand across the liquid piki.

The bowl was built in the traditional coil method of construction. As was traditional in the nineteenth century, the puki in which the bowl coiling was started was a basket, and basket coils are quite visible on the underside of the bowl (see image below).

What is Piki? a bread made from corn meal used in Hopi cuisine.  It is used in many Hopi Pueblo ceremonies and celebrations and takes days to make. It is a very thin bread.

What is a Puki Impression or Bulge? A puki bulge is the result of starting the buildup of the hand coiled clay in a bowl or other vessel such as a flat basket. As the jar is built up, the weight of the wet clay bulges out over the rim of the puki, leaving a distinct bulge at that level, which can be felt by touch even after the firing process. This bulge previously was left in that state but later, as jars were made for the tourist trade, the bulge was sanded away. The very pronounced puki flexure on earlier Zuni jars greatly decreased over time to a less pronounced one. Puki lines are noticeable on pieces made as late as 1920, but rarely afterwards.

Provenance: this Hopi Pueblo Historic Piki Bowl with Piki Remnants and Basket Puki is from a private collection