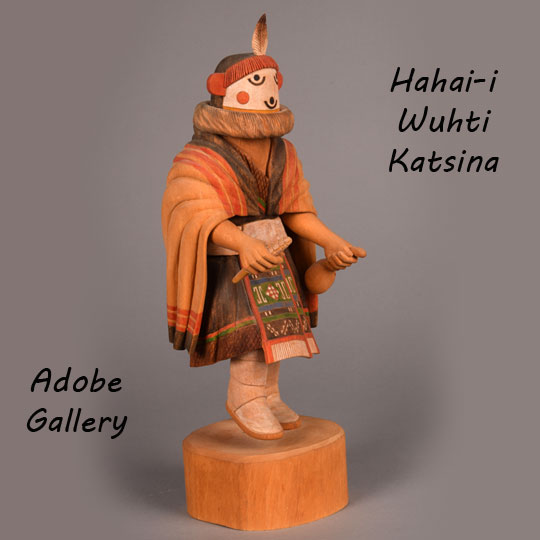 This carving of Hahai-i Wuhti Katsina is an all-wood carving by Hopi artist Earl Yowytewa, formerly of the Hopi Third Mesa villages.  She stands on her left foot as her right one is raised in a dance position.  She carries a gourd in her left hand and an ear of corn in her right one.  The cape draped over her shoulders and hanging down her back was beautifully carved with folds as would be seen in a textile one.  Around her waist and hanging down her front is a wide Hopi embroidered sash.  The carving of her hands is a good indication of superb detail.

Earl Yowytewa (1923-2006) was mentored by Alvin James Makya, and he started carving katsina dolls around 1940.  He started winning awards for his work by 1959 at such venues as the Heard Museum, Museum of Northern Arizona, and the Inter-tribal Indian Ceremonial in Gallup.

Hahai-i Wuhti is one of the more colorful of the Hopi Pueblo Katsinas.  She is present in many ceremonies—Salako, Powamu, Pachavu, Palȍlȍkongti, and even Soyoko.  Her personality is that of a sprightly Hopi grandmother. She may be found speaking in her shrill falsetto for the Nataskas (Ogres) on First Mesa.  She would be demanding meat for them, for, after all, they are her and Chaveyo’s children. Failing to get the kind or quantity of meat desired, she may be heard berating the inconsiderate, hard-hearted individuals and muttering dire threats.

Again, she may be seen in the Salako extorting those giant bird-like katsinas through an elaborate ritual.  In yet another guise she appears in the Third Mesa Pachavu offering the children somiviki, a Hopi food, and when they reach for it she pours water on their heads.  This is not an idle act, but one with ceremonial meanings.

And yet another time she will be seen as the wet nurse of the Water Serpents during the Puppet Dances.  Wherever she appears she is usually very vocal, an attribute not common among the other katsinas.

Provenance: this Traditional Hopi Hahai-i Wuhti Katsina Doll by Earl Yowytewa is from the estate of a family from New Mexico