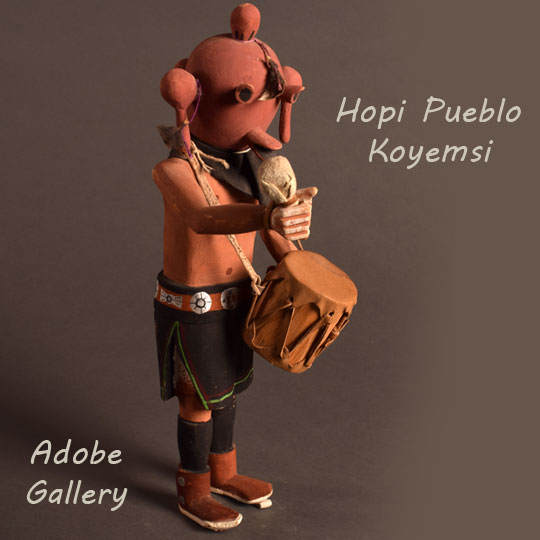 This Hopi Pueblo Koyemsi katsina doll was carved from cottonwood root in the traditional Hopi manner. He is also known as a Mudhead. It is basically an all-wood doll with minor additions such as the fabric scarf around his neck and the hide associated with the drum and drumstick.  He is a mid-twentieth century carving but is not signed with the name of the carver.

At Hopi, he is a curer, magician, dance director, warrior, messenger, sage or even a fool.  He also may appear in the guise of any katsina by donning the clothing of that katsina. The Koyemsi appear as interlocutors between katsinas and humans. They serve religious and secular functions. They function as chiefs and as clowns at various times. They are probably the most popular and recognized of all masked dancers. They appear in almost every ceremony as clowns, drummers, announcers of dances, and many other roles.  The carver of this doll has shown him as a drummer, one of the functions he performs occasionally.