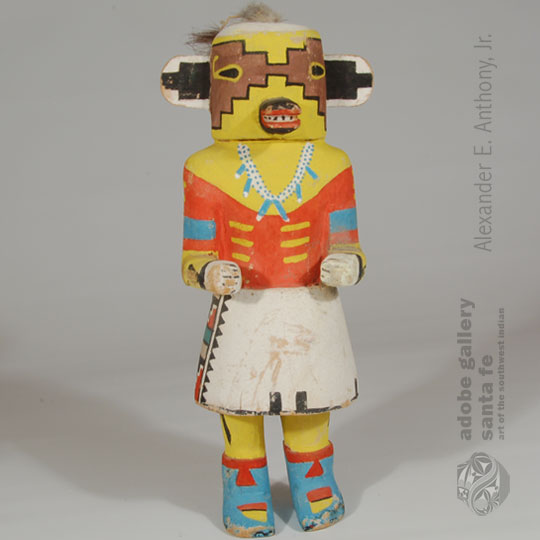 The Lizard Kachina is one of the Fighting Katsinas, a group that furnishes individuals to chastise the clowns for their un-Hopi behavior. He is presumed to represent a species of lizard, the Crotophytus, which is a brilliant turquoise color and very fast in movement.  Young men appeal to this katsina to intercede for them in finding a beautiful wife. The Lizard Katsina usually appears in the Mixed Katsina dance and the Powamuya (Bean) Ceremony.

Based on carving style and paint, this appears to be from the 1940s. It is simple in detail which is a true representation of this Katsina when it appears in the Mixed Katsina Dance or Powamu.  A spread of feathers on the back of the head has been diminished to a small amount, as have the feathers on top of the head.  The doll will stand unaided but is provided with a string by which to hang it, if desired.

Condition: The carving appears to be in very good condition. Some of the paint is marred and scratched, but that is to be expected in a carving of this age.  Both arms have been broken and re-attached or replaced.

Provenance: this Hopi Pueblo Lizard - Monongya Katsina Doll is from the collection of a family from the East Coast 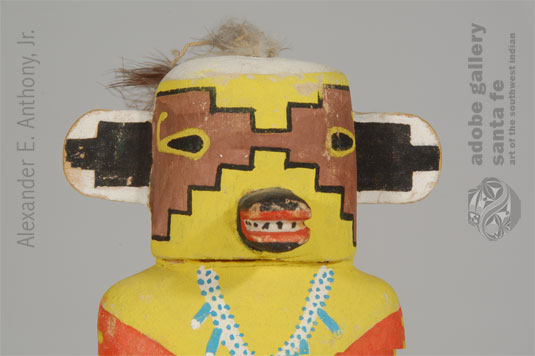