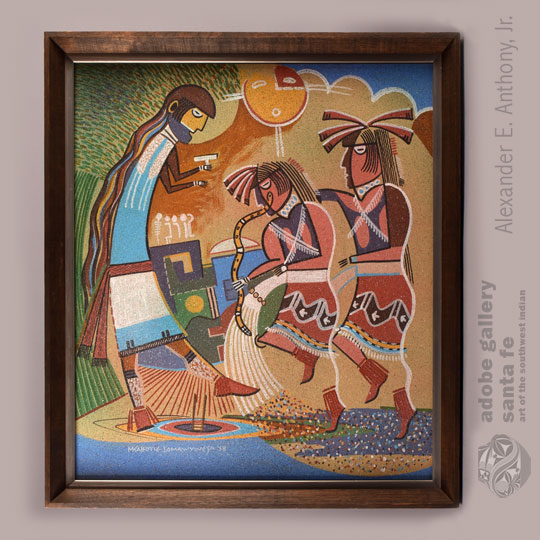 This lively original painting was created by Michael Kabotie, the influential Hopi Pueblo artist whose Native name was “Lomawywesa.”  The image features three participants. In the center of the three is a snake dancer. To the right is a snake priest, following behind with a hand on the snake dancer’s shoulder.  On the left, a third participant towers above the scene, reaching high enough into the sky to align with a sun symbol. Each of these figures was crafted with exceptional attention to color and form.  The ethnographic items—dance kilts, jewelry, paraphernalia—are presented in Kabotie’s unique style, but with just enough true-to-life detail to honor tradition. Kabotie and his Artist Hopid contemporaries excelled at walking the line between abstract and representational. This image is particularly strong in that regard.

Behind the main event, the viewer is treated to a wealth of colorful personal expression.  The pueblo itself, visible through the gap between that snake dancer and tall figure, is made of a combination of interlocking shapes in various colors.  Atop the pueblo, a crowd watches the ceremony. Each spectator is essentially a lowercase “i,” made of a white dot atop a single white line. The ground upon which the ceremony occurs is wonderful, too—colorful circles form rings around a kiva entrance, a dancer’s sash ends where a band of brightly colored dots begins, thick blocks of blue and purple create a strong surface.  As with the participants themselves, all of these elements are easily identifiable but compositionally unique. Adding to the impact of the image is Kabotie’s typically strong use of a bright and varied color palette. This is an outstanding piece from one of the greatest second-generation Hopi painters.

The painting is signed “M. Kabotie Lomawywesa ‘68” in lower left. It is framed in a simple wood frame with a silver interior band.

Michael Kabotie (1942-2009) Lomawywesa was a Hopi artist who spent his life surrounded by great artists.  His father was Fred Kabotie, who was a very influential painter and a Guggenheim fellow. During his junior year of high school, Kabotie spent a summer at the University of Arizona’s Southwest Indian Art Project with Fritz Scholder, Helen Hardin, Charles Loloma, and Joe Herrera.  Like his father, Kabotie was multi-talented—he was a painter, poet, jeweler, lecturer and silversmith.

In the early 1970s Kabotie founded a collective called the Artist Hopid with artists Michael Kabotie, Terrance Talaswaima, Milland Lomakema, Delbridge Honanie and Neil David, Sr..  Their goal was to breathe new life into traditional Hopi art forms. Their reinterpretations of traditional forms and designs are, today, highly collectible. These artists were forward-thinking individuals whose reverence for their culture informed even their more abstract works.  Kabotie passed away in 2009.