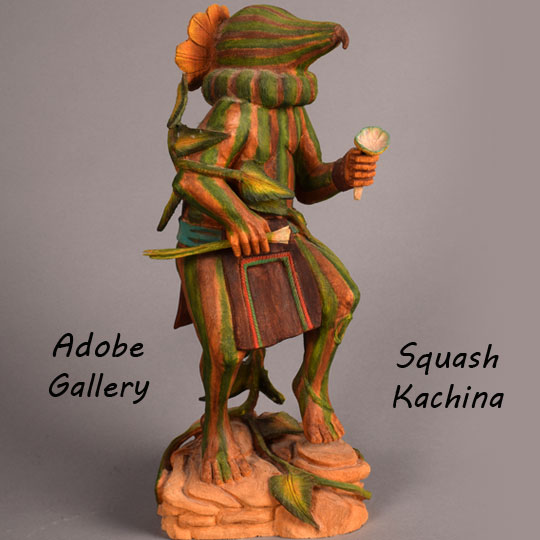 Plants are of great importance to the Hopi, as they have subsisted on their farmed land for centuries.  Many plant katsinas are carved each year and exist as teaching tools.  The Squash Katsina, or Patung, is a Chief Katsina and is responsible for aiding life—giving squash to grow every season.  Although very traditional and commonly carved, the artist went above and beyond in this case.  Using extreme creativity and talent Arthur Holmes manifested something both arresting and comforting to the eye.

This Squash katsina was exquisitely crafted.  Highly textured squash blossoms reside on the back of the head, alongside one in each hand.  A cascading vine with brilliantly colored squash leaves ornaments his body and curls down around the base, making it appear as if Patung himself has grown out of the earth.

He is poised as if caught in a moment of movement, potentially in dance.  One foot is raised, one planted on a carefully crafted base carved to receive the Squash katsina and at the same time, to resemble a pedestal of stones.  His body has been painted from head to toes in the striped green of a life filled squash.  Minimal clothing and jewelry cover Patung and by far the most outstanding aspect of this carving is the organic nature of his being— the squash shaped head and intricate flowing vine from which it grew.

Arthur Holmes, Jr., Hopi Pueblo, is a top prize-winning artist whose carvings command the highest prices from collectors.  He grew up watching his father, Arthur Holmes, Sr., carve katsina dolls.  Arthur is a very quiet person who enjoys carving in the outdoors which allows him to feel as one with nature, and he can relax as he creates his masterpiece.  This same regard for nature and the spiritual realm is reflected in Arthur’s highly detailed and extremely realistic carvings.

Condition: this Katsina is in excellent condition

Provenance: this Hopi Pueblo Patung Katsina, Squash Kachina Carved Doll by Arthur Holmes, Jr. is from the estate of a New Mexico family.