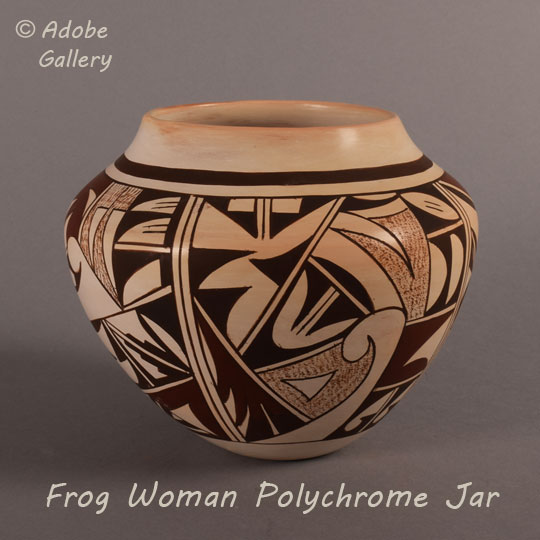 This polychrome pottery jar was made by Hopi-Tewa potter Joy Navasie-the second "Frog Woman." With an appealing shape and strong designs, the jar is a fine example of Navasie's work. It's a jar with a gently sloped shoulder and a rim that turns upward. Just below the vase's widest point, a shallow curve begins that makes its way to the base, which is about the same size as the upper rim. As a whole, the vessel feels smooth and well-balanced.

Navasie's pristine white slip covers the entire exterior and reaches an inch down into its interior. A wide band of Hopi designs decorates most of the slipped exterior, within framing lines at the top and bottom. Four groups of four vertical lines divide the design band into quadrants. Each quadrant mirrors the one on its opposite side, save for a few subtle variations in color and form. Navasie's designs echo her vessel's elegant, well-balanced feel. The bottom of the jar is signed with Navasie's frog hallmark. There is a Polaroid photo of Navasie included with the purchase of the jar. She is holding the jar in the photograph.

Joy Navasie (1919 - 2012) second Frog Woman - Yellow Flower was born in 1919 on Hopi Pueblo's First Mesa. Navasie recalls that she began making pottery at the age of 17. She learned to make pottery from her mother, Paqua Naha-the first Frog Woman. Her distinctive decorative style is instantly recognizable, as she used a white slip, over which she painted dark brown and rust color designs. Her skillful application of bird, water and sky elements around perfectly formed pots was and still is unique. She was a master at the craft.