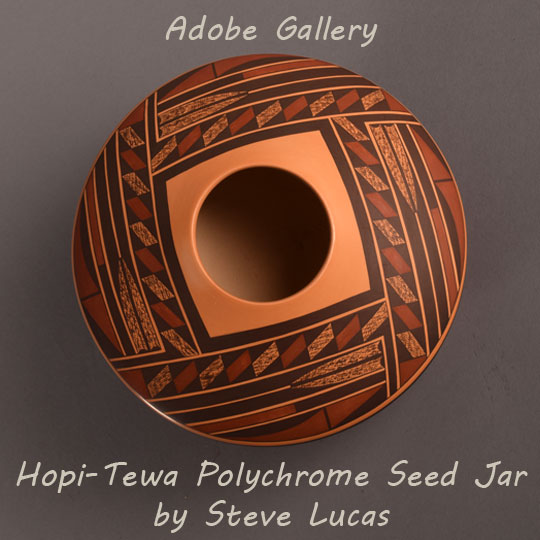 It appears to be one that Hopi-Tewa artist Steve Lucas made around the year 2000, a period before his use of colorful pigments.  The colors used in this one are traditional Hopi-Tewa ones—brown mineral pigment, red clay, and the yellow hue of the natural clay.  Since this jar came to us from an estate, we have no background information or collection data.

Although he stayed with traditional colors, Steve modified the layout of the upper neck.  Adhering to the square around the neck with a wide dark brown line as a frame, he diverted for the design.  There are four design panels that are the same.  Each one contains tilting bars which alternate with red slip and spackling brown.  One section appears to be the feather of an arrow.  The lower two panels are red and brown.  The layout of the four is such that it appears each overlaps its neighboring design.

The lower section of the jar is covered in stone polished red slip, from the mid-section to the base.  The underside is signed S. Lucas with the corn symbol, reflecting his clan, and the head of a koyemsi or mudhead, reflecting his Tewa name.

Steve Lucas (1955-) Koyemsi is recognized as one of the finest of the younger generation Nampeyo family potters.  He is the grandson of Rachel Namingha Nampeyo and the great-grandson of Annie Healing Nampeyo. His mother was Eleanor Lucas.  We do not have an exact date of birth, but he is reported by various sources to have been born around 1955. His Hopi-Tewa name is Koyemsi—the Hopi-Tewa name for the Mudhead Katsina.  Lucas has been a consistent award-winning artist at Santa Fe Indian Market and Gallup Inter-tribal Indian Ceremonial, among others. His awards include First and Second Places at the 1994 Santa Fe Indian Market; First, Second and Third Places at the 1995 Indian Market; Best of Division at the Heard Museum in 1997; Best of Show in the 1998 Santa Fe Indian Market.

Provenance: this Hopi-Tewa Polychrome Pottery Seed Jar by Steve Lucas is from the estate of a previous client of ours who had impeccable taste and purchased accordingly.