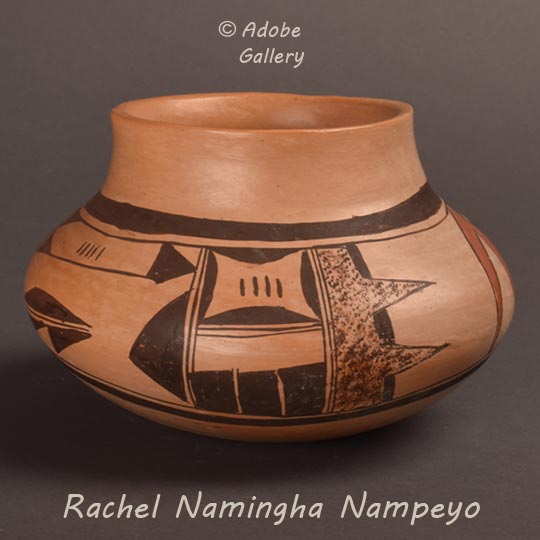 This jar is typical of her work from the mid-twentieth century, probably made around 1950 or 1960.  It is a vessel shape which she seemed to particular like—short and squat with mid-body bulge and a straight and long neck.  Her designs generally were restricted to the area of the body, with the neck left without design. The design on this one features a simplified and stylized bird from Sikyatki inspiration.  Between the two birds is a stylized eagle tail executed in monochromatic pigment.

Rachel Namingha Nampeyo (1903-1985) was a granddaughter of Nampeyo of Hano, daughter of Annie Healing and mother of Priscilla and Dextra. She was an accomplished potter recognized with an exhibition of her work in 1994 at the National Museum of the American Indian, Heye Center, New York, in Creation’s Journey: Masterworks of Native American Identity and Belief.

A large selection of her pottery is in the collection of the Museum of Northern Arizona, some as early as 1940 and as late as 1980.  She has been included in numerous publications for her contribution to Hopi-Tewa pottery.

Provenance: previously in the collection of a Santa Fe family from whom we acquired it in 2008, and which we sold to a client from whom we now have it to sell again.