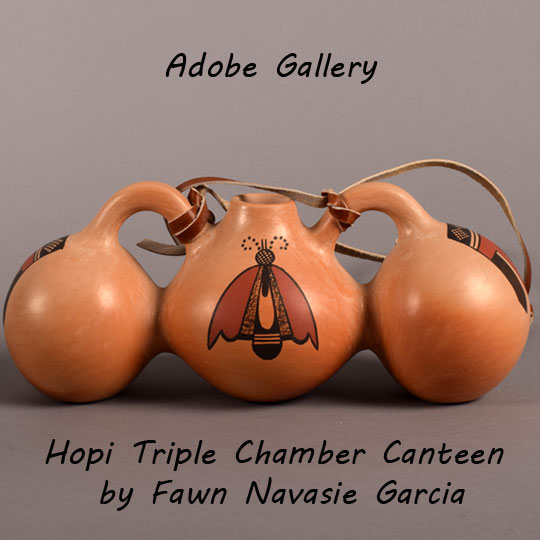 Triple-chamber canteens existed in prehistoric pueblo cultures.  This one was made by Hopi potter Fawn Navasie Garcia in 1998.  It is made from the yellow-slip clay rather than the white-slip clay of her mother’s style. The three chambers are connected in a manner by which the liquid contents could flow from one chamber to another.  The potter retained the natural color of the clay, without application of an additional slip.  The clay was polished to a smooth finish.  On the central chamber, she painted a moth, of the style seen on prehistoric Sikyatki pottery. On each of the end chambers, she painted an eagle tail design, also from the prehistoric Sikyatki culture.  The base of the central chamber has the name “Fawn” and a fawn’s hoof print.  The elegance of this canteen is its simplicity of design.

Fawn Navasie Garcia was previously known as Little Fawn. She was born in 1959 and is the daughter of the late Eunice Navasie, the original “Fawn.” Little Fawn was taught all the intricacies of working with the white clay, which, she says, is more difficult than with other Hopi clays.  Following an apprenticeship with her mother, Little Fawn broke out on her own in 1979. Little Fawn advanced to the title Fawn following her mother’s death. Her name has variously been published as Fawn Garcia Navasie and Fawn Navasie Garcia.  The latter is apparently her preference, as that is the way it appears on her business cards. She married James Garcia Nampeyo.

Provenance: this Hopi Pottery Triple Chamber Canteen by Fawn Navasie Garcia is  from the collection of a family who purchased it from the potter in 1998 at Santa Fe Indian Market.