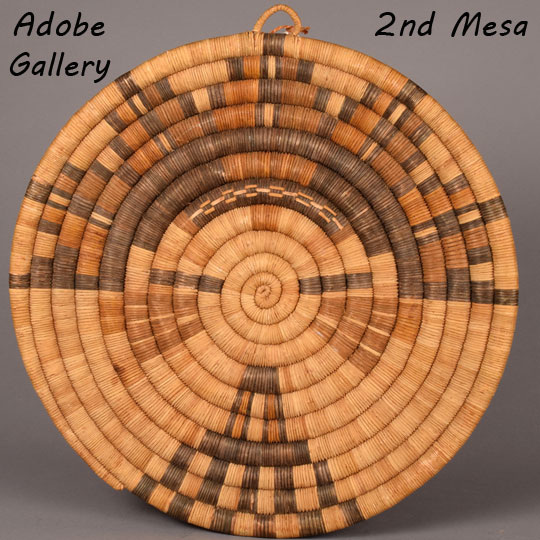 It is sometimes difficult to determine the katsina image on a basket because the image is not as detailed as on a katsina doll, however, the image on this Second Mesa coiled tray is that of the Salako Katsina, either the male or female.  The huge tablita and the black lines on the lower end, which represent feathers, are the clues to the katsina.

Hopi basket weaving was, once, hundreds of years ago, strictly for utilitarian purposes.  Then it became part of the Hopi ceremonial life, and now, a third function is that of an object to be sold to the non-Indian community.  Neither of the two earlier functions has been eliminated, only a third one has been added.

“In the hands of Hopi women, natural fibers from plants that grow on and around the Hopi Mesas are transformed into items to meet daily needs and to serve as personal gifts.  Plaques have great value attached to them when they serve as gifts given by Katsinam to children and adults.  Plaques also serve in the rites of Hopi religious events, when they hold prayer feathers (pahos), prayer sticks, and sacred cornmeal.  In the literature of the late nineteenth century, plaques were usually referred to as sacred baskets or sacred trays.” [Teiwes, 1996:xx]

Hopi basketry is used in a way to express Hopi generosity to others, for giving thanks for favors, and for presenting food to families and clan members.  It takes a tremendous amount of time and effort to make a basket, so its use as a gift is a most generous act.

“The Hopi closeness to the Earth is represented in the arts of all three mesas, whether in clay or natural fibers.  What the earth produces becomes art in the hands of Hopi artists. . . . What clay is to a potter’s hands, natural fibers are to a basket weaver.  Could it be that the feel in their hands gives the artist a sense of interconnectedness with their natural surroundings?  This feeling provides, quite unconsciously perhaps, an added satisfaction to the pride of a finished piece of basketry or pottery.” [ibid,xxiv]

For the non-Indian collector, Hopi plaques from Second and Third Mesas are works of art to be displayed in a home and enjoyed for their beauty.  It, too, is important for us to understand their importance to the Hopi in their ceremonial life and culture.  It adds to the appreciation of the basketry as art.

Condition: very good condition except for the hanging hook which has separated on one end from the coil to which it was attached.  A string hanger has been added at the same point so the plaque can still be hung on the wall.

Provenance: this Hopi Second Mesa Coiled Pictorial Tray with Salako Katsina Image is from the collection of a gentleman from Colorado Woven Worlds : Basketry from the Clark Field Collection at the Philbrook Museum of Art [SOLD]
by Lydia Wyckoff